The Mark Kermode 'It's Only A Movie' Book Tour 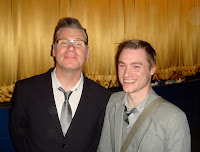 After bravely/foolishly (delete as applicable) staying up till 3.00am to watch the New Orleans Saints deservedly win the Superbowl, I managed to get up and grab a train down to Edinburgh and our sister cinema, The Cameo (voted one of the best independent cinemas in the UK although I’m sure that if The Guardian had visited The Belmont then we would have made the list too!).

The reason for my visit was that The Cameo was playing host to the UK’s most infamously coiffured film critic, Mark Kermode to promote his new autobiography IT’S ONLY A MOVIE. What followed was an entertaining one man show as DrK revisited a few of the stories and anecdotes from his years in the film critiquing business.

Yes, many of us familiar with Mark Kermode over the years had probably heard some of the famous stories before, like Herzog getting shot and the obligatory mention of THE EXORCIST as “The Greatest Movie Ever Made”TM but it really didn’t matter when they were told with an infectious enthusiasm that made it very apparent that he still has the same love for the world of cinema as he had when he saw his first film some thirty plus years ago.

Fans of the Mayo and Kermode podcast would have been delighted to see the talk come to a close with him pulling out his stylophone for a musical tribute to Duncan Jones’s MOON to make up for its shocking Oscar snub.

A short Q&A followed with almost everyone in the audience having two questions instead of one but we found out that the Film 2010 rumours are sadly false (for the time being anyway) and that someone in the audience was sitting behind Mark when he had to remove someone who fainted during a screening of IRREVERSIBLE at the Filmhouse in Edinburgh.

Finally Mark finished the evening by doing a book signing where he showed that he was a true gentleman by taking the time to speak to every person individually and his encyclopaedic knowledge came to the fore as he rattled off details about cult films, recognised people by their twitter/email names from the podcasts and even a guy’s short film that he’d judged in a competition several years ago.

They say that you should never meet your heroes but after last night I’m glad that I’ve met one of mine.

Mark Kermode will be appearing at several Picturehouse cinemas over the next few weeks so if you can beg, borrow or steal a ticket it is worth it because even if you have seen AVATAR in 3D (and I saw it on IMAX), you haven’t seen AVATAR until you’ve seen Mark Kermode’s AVATAR!