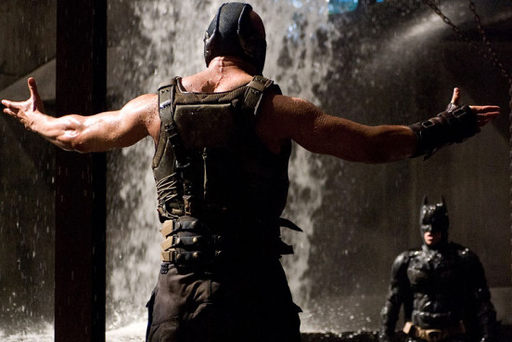 A suitably rousing and emotionally fitting end to "The greatest trilogy of all time".
Christopher Nolan's Dark Knight was not the hero that we deserved but the hero that we needed following the Batman and Robin disaster and his films managed to do something that no comic book movie had been able to do, and that was to transcend the genre and be treated as amazing films.
Nolan managed to break the comic curse that saw such franchises as Blade, X-Men and Spider-Man suffer from poor third instalments, instead managing to tie everything together and complete Bruce Wayne's journey from angry orphan to crime fighting legend.
It also gave rise to the year's favourite impression - Bane voices!
My full review of the film can be read here 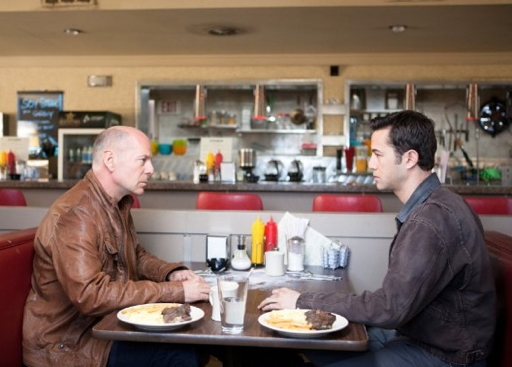 Ranks up there with Moon and Inception as one of the smartest science fiction films of the last few years.
Some may have been disappointed they didn't get the Bruce Willis sci-fi action adventure they were expecting from the trailers but thankfully this is much more Twelve Monkeys than it is Surrogates!
It is very much a hard-boiled Tech Noir that draws on elements as varied as The Terminator, Akira and Casablanca yet still manages to create something that feels fresh and unique.
"This time travel crap, fries your brain like an egg" and you can expect many hours being lost to conversations with your friends in the pub over the various timelines and continuities that spring up as a result of the plot.
I really hope that the Academy doesn't turn up it's nose as it tends to do with science fiction and rightfully give Looper a nomination for Best Original Screenplay. 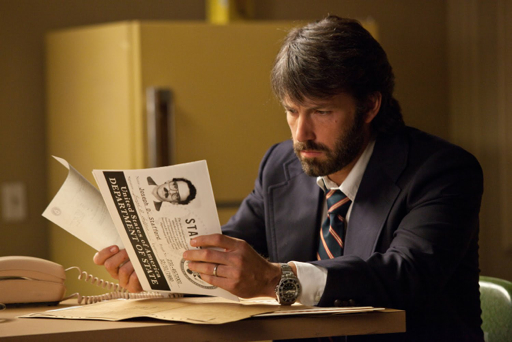 Well who would have thought when Gigli was released that one half of "Bennifer" would go on to direct one of the year's best films and be a leading contender for a Best Director Oscar?
This is one of those stories where the truth is stranger than fiction, where you couldn't make up a story this good if you tried and Affleck excels at moving between a deft Hollywood satire and gripping hostage drama.
It evokes memories of Apollo 13 in that it is so well executed that even if you know the story and the outcome, it makes you doubt that everything is going to turn out ok.
Even my mum loved it, calling it "one of the best films I've seen in years"! 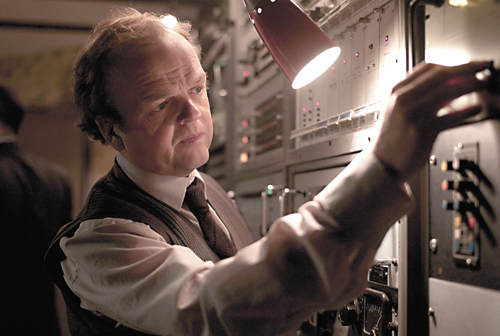 This is easily the film on my list that will have been seen by the fewest people but I urge you to give it a watch when it is released on DVD/Blu Ray on 31st December.
What you will find is a beautiful homage to the Italian Giallo films of the seventies where Toby Jones goes to Italy to work on the sound effects for a horror movie.
What follows is an astounding descent into madness accompanied by some of the best sound mixing and editing of the year.
Seriously, you will not find a better edited film than this. The transitions between scenes are extraordinary. 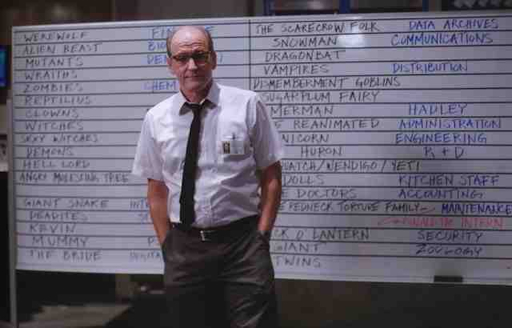 CABIN IN THE WOODS

The most entertaining horror film set in a cabin in the woods since Evil Dead 2.
It breathed new life into tired, old cliches by challenging everything we know about the genre.
How did it achieve this? Well to go into that here would spoil the surprise wouldn't it.
Just go into it knowing as little as possible and you are in for one wild ride.
It may be the smartest and wittiest horror of the year, but given that it is playing with the rules of the genre, it is not the scariest due to the fact that audiences will know what's coming (except for the opening credits!). For the year's scariest film, check out Sinister. 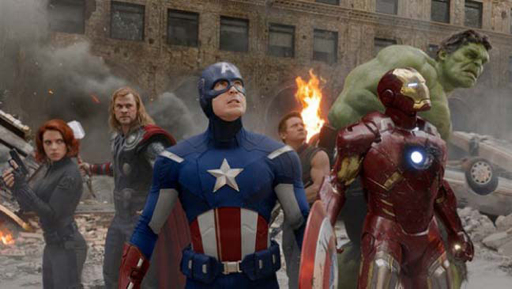 Adam West was right you know, "Some days you just can't get rid of a bomb" as Avengers becomes the second film in my top ten to feature a superhero attempting to remove a nuclear weapon from New York City/Gotham.
While I consider The Dark Knight Rises to be the better film and more satisfying on an emotional level, The Avengers is as close to a perfect representation of what a comic book should feel like on the big screen.
The culmination of Marvel Studios Phase 1 could have been a disaster but Joss Whedon went two for two in 2012 and provided the biggest collective nerd-gasm the comic book movie has ever seen.
He survived a terrifying juggling act of giving so many lead characters their moment to shine including Clark Gregg's Agent Coulson and finally gave us the Hulk we were wanting to see.
In other words, The Avengers was a "HULK SMASH" hit! 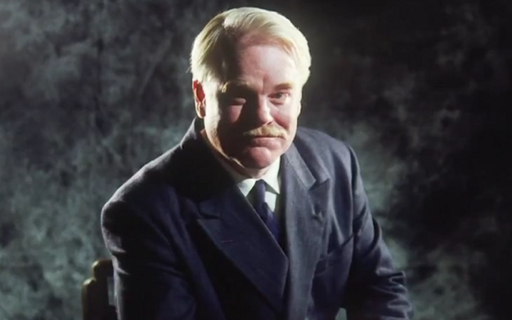 Similar to the Scientology that allegedly inspired The Cause, the religious group at the heart of the film, many people dismissed this film as pretentious and for all its ramblings and speeches, having nothing at its core to believe in.
I for one however found the movie to be beautiful, poetic and spellbinding thanks to a career-best performance by Joaquin Phoenix (an actor I've never been that taken with before) and his on-screen relationship with the always-superb Philip Seymour Hoffman. The scene where The Master processes Freddie by making him answer questions without blinking is one of the scenes of the year.
My full review of the film can be found here. 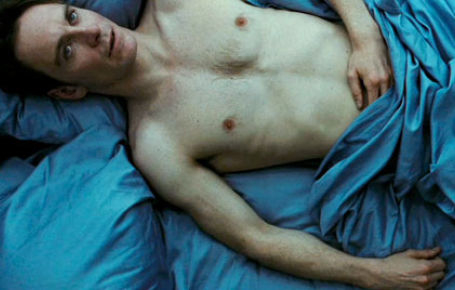 I could write a list of superlatives about this film as long as Fassbender's... oh, you know where that was going.
Fassbender delivered the year's bravest performance in a movie that could be seen as a modern day American Psycho albeit one where his obsession isn't murder but sex.
My full review of the film can be found here. 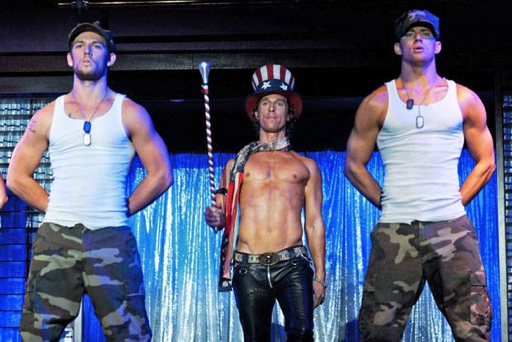 So much more than the "male Showgirls" Hen night party film the adverts made it look like, showcasing Soderbergh's ability to adapt to any genre thrown at him, Magic Mike stripped off to reveal plenty of heart and soul as well as bulging biceps and rippling abs.
This film also cemented two things in 2012.
One - Alongside a career best turn in Killer Joe, it saw return of Matthew McConaughey from rom-com hell and fulfilling the promise shown back in the early nineties in films like Dazed and Confused and A Time To Kill.
Two - It also marked one of the very few occasions where I've had to admit that I've been wrong in a critical assessment. I had previously written off Channing Tatum as a bit of a meathead following such crap as GI Joe: Rise Of Cobra and the Step Up movies, even describing him in The Vow as "unfortunately having more varieties of chunky knitwear than facial expressions". However he was terrific as Magic Mike and a revelation as he brought the funny in 21 Jump Street.
Channing Tatum, if you are reading this... I'm sorry, you're ace! 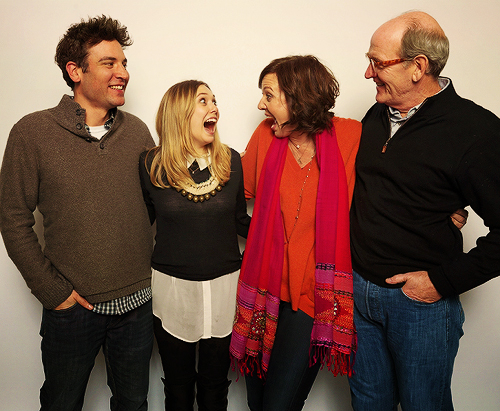 A Garden State for the thirtysomething's, it is the year's smartest rom-com, features scene-stealing turns from Richard Jenkins and Allison Janney and a bewitching performance from of the years breakout stars Elizabeth Olsen.
It is also the most sentimental pick in my top ten because if it wasn't for this film I wouldn't be back with Picturehouse at The Belmont.
Stopping off in London after a holiday in New York, I found out about a preview of the film with Q&A with Olsen at the lovely Gate Cinema which is part of the Picturehouse group. There I caught up with a couple of folk I hadn't seen since I left, which prompted a visit to head office and within a month this fortuitous series of events led me to being back with the company.
My full review can be found here.