"Have you ever had one of those nights that started out like any other and became the best night of your life?"
Gary King certainly did, and 22 years down the line he still thinks about that night and so he rounds up his childhood friends aka "The Five Musketeers" and they head back to their hometown of Newton Haven to have another crack at The Golden Mile. 5 guys. 12 pubs. 50 pints... 60 pints.
But the times they are a changing and it's not long into the crawl that things turn a bit "Invasion Of The Boddingtons Snatchers" and the lads will have more than a hangover to deal with if they are to make it to The World's End... The best friendships are the ones where years could have passed without seeing each other but within half an hour, the old camaraderie and jokes are flowing as fast as the beer and its as if nothing has changed at all.
This is certainly the case with messieurs Wright, Pegg and Frost. It has been six years since Hot Fuzz and they seamlessly pick up where they left off with a terrific opening sequence outlining the ill-fated pub crawl with Wright's traditional smash cut and frenetic editing, an eclectic and killer soundtrack and a script that is smart, funny and multi-layered.
However beyond the appearance of a particular ice cream, a fence gag and fruit machine sound effect, this is an all-together more grown up flavour of Cornetto.
Gone are the multitude of pop culture references and the gag-ratio has been toned down in favour of something much more reflective, nostalgic and ultimately bittersweet. Although I can guarantee that a certain line that features the word Legoland will become one of the quotes of the year.
The film makers themselves have admitted that they are older and not the same people they were when they first worked together on Spaced and Shaun Of The Dead so it would be have foolish to try and act that like they were still in their twenties... They just leave that to their main character. 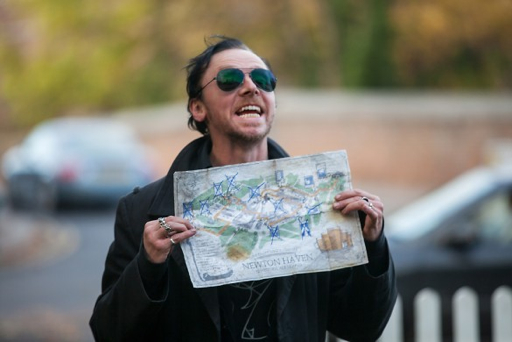 One of the main themes of the film is the notion that you can't keep living in the past, like a shark you have to keep moving forward or die. And with Gary King what we have on our hands is a dead shark.
Gary is unable to realise this at first, even with help from his best friends, and in many ways bears resemblance to one of 2013's other cinematic (and literary) nostalgics, The Great Gatsby.
Nick Carraway says the line "You can't repeat the past" to which Gatsby replies "Why of course you can".
Gatsby has spent most of his life and fortune in one long party, trying to recapture that one perfect moment in his life (his relationship and love with Daisy Buchanan), a pursuit which is ultimately doomed...
Similar to Gary and his attempt to conquer the Golden Mile.
His character can come across as selfish and annoying but we've all had a friend like that yet underneath there is a sadness which makes him a rather tragic anti-hero.
It is a refreshing change to see Pegg & Frost mix up the dynamic by having Frost play the straight man while Pegg gets to play the comical f*ck up this time round. They may have swapped roles but the chemistry is still there and you really get a sense of the history between the two.
There is a scene between them in the final pub which went to places one would never have expected when the trilogy started nearly ten years ago, leaving me with a lump in my throat and is the best on screen work that Pegg and Frost have ever done. 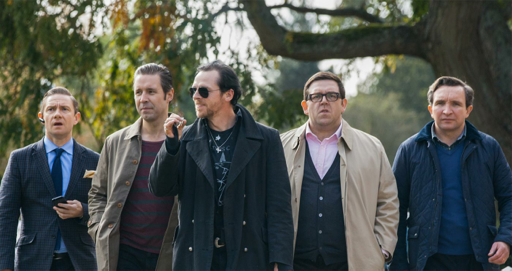 The Cornetto Trilogy has always managed to draw some incredible talent into appearing in these films and once again they have assembled one of the best British ensemble casts outside of the Harry Potter franchise.
A whole host of familiar faces (and voices) pop up in cameos alongside newcomers like Rosamund Pike and Eddie Marsan who fit in perfectly with Paddy Considine rounding out The Five Musketeers along with Martin Freeman who excels in what might be the trickiest role to play outside of Pegg's.
The reason they have been able to continue to attract this level of talent is down to the quality of the script and filmmaking.
Each part of the trilogy has featured at its core, an individual or small group fighting against the homogenisation of an external force, whether that be zombies, the NWA or The Network.
Wright & Pegg have taken genres typically associated with Hollywood (the zombie horror, action blockbuster and science-fiction) and grounded them in a very British reality by having them becoming an obstacle to the protagonist's main goal (Shaun getting his girlfriend back, Angel trying to solve a Midsomer Murder Mystery and the quest to conquer The Golden Mile).
The World's End has just the right level of juxtaposition that allows Wright to deftly move between the ridiculous and the sublime, effortlessly moving between comedy and tragedy. For example, going from a heartfelt confessional moment of pain and regret to a beautifully choreographed bar brawl that combines drunken monkey style Kung fu and early 90s' WWE moves, but never at the expense of character.
Plus the scripts are very densely plotted that there is much to enjoy on multiple viewings with the names of the pubs acting as chapter titles for the action and even subtly hints at how the plot will unfold from the very beginning. This is also goes for the soundtrack which features several classic tracks from the early Nineties that fit the mood perfectly but also contain many lyrics that echo emotions and actions that drive the story.
If there were to be any criticisms, it may lie with the final epilogue which feels just a touch out of place with the rest of the film but it does provide one of the main running gags which helps tie the whole trilogy together.
The World's End might not have been the conclusion to the Cornetto Trilogy that people were perhaps expecting but I've tried to think of another way it could have ended and my mind is drawing a complete "blank".
The best films are the ones that stay with you long after you leave the cinema, the ones that speak to you on a personal level, like the filmmakers wrote it specifically for you and I feel that this one more than the others in the trilogy will grow to fill that place in many cinemagoers hearts (particularly ones of a certain age) as they take stock, reflect on life and get in touch with some old friends for a nostalgic trip back down memory lane to their own Golden Mile.