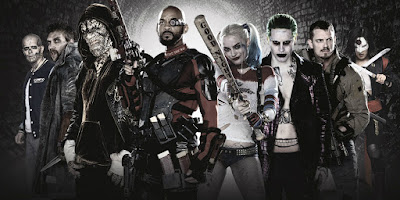 Ever since Christopher Nolan and Christian Bale hung up the cowl in The Dark Knight Rises in 2012, the DCEU (DC Extended Universe) has been playing catch up with the Marvel Cinematic Universe, which itself only started back in 2008 with the risky (at the time) Iron Man.

At that point, besides Spider-Man 2 and X2, the DC movies were considered the better films.

But Marvel found their groove and after a string of successful solo movies, they unleashed The Avengers and have never looked back.

Following the lukewarm reception to Man Of Steel, they were desperate for a hit with Batman VS Superman but the critics once again were not impressed.

Suddenly there was a LOT riding on the success of Suicide Squad and unfortunately they are left with another mess on their hands.

It is difficult to tell how much the finished product has been influenced by the fallout from the BvS backlash but the film feels tonally all over the shop.

We are introduced to Deadshot and Harley Quinn at the very start, only to then be reintroduced to them again as Amanda Waller outlines her Task Force X project along with some other bad guys.

Characters drift in and out of the movie, some only there for exposition (or is that explosition?), randomly inserted cameos that serve no purpose except "Justice League is coming!" and scenes seem to be disjointed, like something has been left on the editing room floor. Plus the action scenes are dull and often confusing (particularly the climatic showdown).

The first half features a director plugging rolls of quarters into a jukebox and putting the random selections on top of scenes only to run out of cash halfway through and replace them with a generic score.

Character-wise, Will Smith's Deadshot gets an actual backstory and has the most charasmatic turn in the film. Margot Robbie's performance as Harley Quinn bigger than her hot pants (which isn't saying much) and Jay Hernandez's Diablo does get an arc to his story.

Beyond that, everyone else is completely forgettable but the two worst performances are from Cara Delevingne and Jared Leto's Joker.

Delevingne's Enchantress spends most of her time awkwardly gyrating round the room like she is trying to remove a wedgie whilst doing an impersonation of Cate Blanchett in Lord Of The Rings when Galadriel goes all demonic!

The fact that Leto spent all that time and effort tormenting the cast and crew with his antics is the biggest joke because his Joker pales in comparison to the other iconic screen interpretations.

The biggest condemnation of the film is actually in a post credits scene where two characters discuss how the Suicide Squad mission was a failure and they should have left it to the Justice League. Take out the DC characters and put in two WB executives and you have an accurate description of conversations that will be had in the office on Monday morning.

The Manic Street Preachers sang that "Suicide Is Painless". Sadly watching Suicide Squad is anything but.