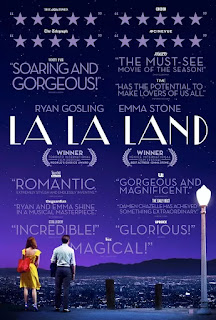 The bright lights of Hollywood draw in and seduce many a dreamer, like moths to a flame, but do their dreams come true and end up with their name in lights or do they go down in flames?

Films set in the City of Stars can go either way. The Neon Demon and Mulholland Drive show the dark side of what can happen to innocent souls in pursuit of fame and fortune but La La Land, from the outset anyway with a glorious opening number Another Day Of Sun set in a traffic jam, certainly feels like it is full of rays of sunshine, hope and optimism.

This is the L.A. from the movies where anything is possible if you believe you can make it.

Of course, we've all know that isn't strictly true and our main characters Mia, a barista and aspiring actress, and Seb, a jazz pianist who wants to open his own club, both have their own dreams and the film follows them as they face obstacles to their goals and the prospect that what they have been seeking all this time might not be success but actually each other. 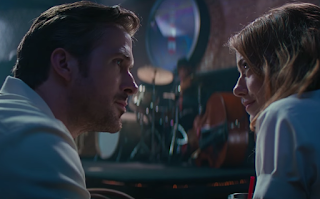 If Hollywood still operates under the Studio System, Ryan Gosling and Emma Stone would be permanently paired together for the rest of time. The chemistry that was first showcased in Crazy, Stupid Love is off the charts here and is one of the major reasons that the film works so well.

Another reason it works is that it is not beholden to the pitfalls of a stage-to-screen adaptation. Sometimes musicals when they transfer from stage to screen (Chicago, The Producers) struggle to escape the feeling that you are just watching a show. La La Land follows in the footsteps of modern musicals such as Moulin Rouge, South Park: Bigger, Longer Uncut (yes, it is a musical and a damn good one at that!) and has a natural ebb and flow as it follows the central relationship through the seasons.

There were sequences in the film that caused a smile to break out across my face from ear to ear and fill me with a joy I haven't felt in a cinema screen since the final tap dance number in The Artist. And like that film, expect to hear "And the Oscar goes to... for La La Land" quite a lot as Hollywood loves nothing more than a film that celebrates the industry.

There are references to an entire library of cinematic classics; including Singin' In The Rain, Vertigo, Rebel Without A Cause and Casablanca. Like these films, La La Land remembers that the purpose of cinema is to provide an escape from everyday life, to transport you to another place and time and it certainly does that.

City Of Stars might be gaining all the attention but it was the song Audition (The Fools Who Dream), which reminds me of The Rainbow Connection, I was transported back to Studio 54 watching Emma Stone perform in Cabaret, where she first proved that she could hold a tune. Gosling equips himself well too and while not quite Fred and Ginger, they are the modern day Fred and a Ginger.

To quote an internet meme, find someone who looks at you the way critics look at Ryan Gosling and Emma Stone look at each other on screen.