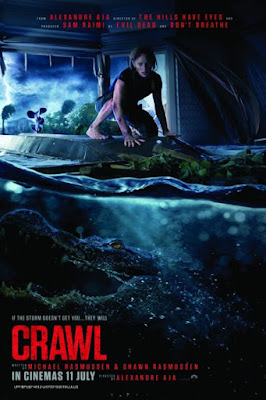 Director Alexandre Aja makes a big splash with this year's sleeper horror hit Crawl. Like many great horrors, the title has a double meaning. Not only do the monsters crawl but the majority of the action takes place in a crawl space beneath a house... plus it makes your skin crawl!

Haley (Kaya Scodelario), a collegiate swimmer, must travel back home to check on her estranged father (Barry Pepper) during a hurricane when they both become trapped in the basement with a vicious alligator. With no one coming to their Gator-Aid, they must work together as flood waters and tensions rise around them, bringing fear and their troubled past to the surface in a race against time.

Having made his name with French horror Haute Tension aka Switchblade Romance, Aja has abandoned any notion of a twist that featured in that film that split audiences right down the middle like a gator chomping through a Floridian. This is an old school thriller that is as lean and mean as a hungry alligator during hurricane season. Also, he gives the humour present in his Piranha 3D remake a wide birth to focus on building the tension and emotion... although he still knows when to throw in an effective and gory kill to satisfy the blood lust!

Scodelario makes for a tough, resourceful scream queen whose fiercely competitive swimming background helps to level the playing field once the protagonists are underwater. At times, when drenched and vunerable, she is almost the doppelganger of Emma Stone and she will undoubtedly have audiences on her side willing her to survive.

The film does have a standard OTT premise needed for a good old-fashioned horror thrill ride but the writers make sure to ground this in as much believability as possible. Decisions made by characters feel authentic and the barriers to their escape flow naturally that you never scoff or remark "well that would never happen". Plus the tension and threat is maintained throughout to the point where no one is safe... even the dog!

A genre cross between Jaws and Hard Rain, Crawl is a gripping horror with bite that will once again make you afraid to go back in the water and is the most thrilling way to spend 87 minutes in Florida until Galaxy's Edge opens later this year!