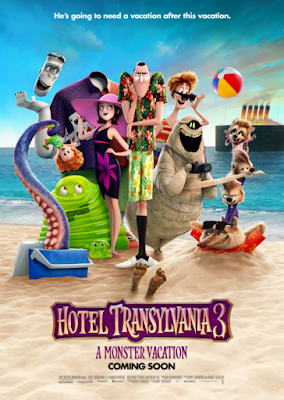 *Full disclaimer - I only went to see Hotel Transylvania 3: A Monster Vacation because I needed something to pass the time before the Ant-Man double bill and the timings of Mission Impossible Fallout didn't work! I then spent the trailers Wikipedia-ing the first two films to remind myself just what happened*

Hotel Transylvania 3 is the third instalment of the animated (or should that be reanimated) franchise that just like a creature of the undead, refuses to die. No matter what the critics say.
It's like the people who produce films starring Adam Sandler and his cohorts Kevin James, David Spade, etc, etc have discovered that the only way to make them palatable these days is to restrict them to voice roles and market them to kids and it seems to be a lucrative pastime.
In British TV sitcom lore, it is known that when a programme has run out of ideas for their characters... they send them on holiday!
*Ahem*
So the plot of the movie sees the staff of Hotel Transylvania head off for some R&R on a cruise from the Bermuda Triangle to the Lost City of Atlantis.
The problem is that this cruise ship is captained by Erica Van Helsing, the great-grand daughter of Abraham Van Helsing, who is determined to destroy all monsters and finish her family's work.
That is the plot but it is pretty irrelevant because it is merely an excuse for Dracula to fall in love with Erica and provide Sandler 90 minutes to do his "oogity boogity boo" child's voice that made him famous in the late Nineties.
Speaking of the Nineties, the Deus Ex Machina that ultimately saves the group from the Big Bad at the end is an annoyingly catchy floor filler that just, maybe just, be remembered by some of the parents in the audience but will certainly go over the heads of the kids.
Cruises are not for everyone. Some people find that the entertainment is dull or cheesy, that there is a sense of confinement and no escape and worst of all, you could spend the majority of your time feeling nauseous.
Sounds about right.