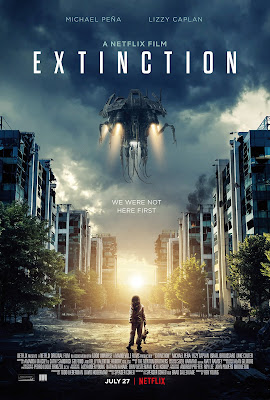 Extinction is the latest Netflix Originals film to hit the small-to-medium sized screens around the world and of the science fiction films to land on the streaming platform this year (Annihilation, Mute, The Cloverfield Paradox), it certainly feels the most generic and formulaic to begin with.
The ever-dependable Michael Pena plays Peter, a husband and a father, who is plagued by recurring nightmares of an alien invasion. As the frequency of the dreams increases, it causes him to drift further and further from his family.
Persuaded by his friend to visit a clinic to talk about his issues, he meets another patient having the same dreams and convinced of a conspiracy to wipe them of their memories. Is there something larger at work here?
Just when suspicions of a Body Snatchers-style situation are raised, Peter is unsurprisingly proved correct in his visions as aliens invade Earth in a huge action set piece that sees Pena try to escape their apartment building with his daughters and wife played by Lizzy Caplan (no stranger to alien invasion having appeared in Cloverfield and the Marvel One Shot set after the Invasion of New York).
The scope of the action scenes indicate that it was directed for the big screen but ultimately the budget and CGI make it feel more like a straight-to-DVD sci-fi film from the late Nineties.
It is a shame that the movie feels so carbon copy to others that have come before because with a format like Netflix, there is that danger that they could easily switch over to watch something else.
And in doing so, they would potentially miss out on dramatic plot developments in the second and third acts that flip everything on its head and make you question everything that you have seen before.
It is a fascinating twist that succeeds in temporarily elevating the film above its genre roots into something more profound.
While it is certainly no Annihilation, the twist should give Extinction a chance of not dying out on Netflix in the immediate future.