Set It Up - Netflix Originals Review 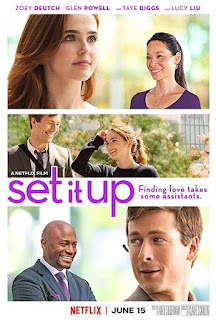 The greatest back-handed compliment that you can give Set It Up is that it doesn't feel like a Netflix Originals film. It feels like a mainstream Hollywood Rom-Com that has found its way to the streaming site after playing in cinemas.
It might hit every single beat of the romantic comedy playbook but it does it with a slickness and charm, delivered by strong lead performances.
Set in New York, as so many of the classic romantic comedies are, it starts with a montage of assistants being treated terribly by their bosses to the tune of Nowhere To Run by Martha & The Vandellas (itself provoking images of another classic NYC movie The Warriors).
This introduces us to the two lead protagonists, Harper (Zoey Deutch) and Charlie (Glen Powell). They are executive assistants to high powered and extremely demanding bosses (played by Taye Diggs and Lucy Liu), who have clearly learned nothing from films such as Swimming With Sharks and The Devil Wears Prada and live in the Hollywood version of New York where you can still act like a complete dick to your staff and have no recourse from Human Resources whatsoever. Anyway, I digress...
The being-on-call-24/7 lifestyle leaves the assistants with no time for themselves. Harper dreams of being a writer for her boss's online Sports website but cannot find the time to finish an article. Charlie has a high maintenance model girlfriend who is sick of being stood up all the time.
After bonding over a meet-cute involving their boss's dinner orders, they decide to try setting up their bosses into a relationship that would provide them with more time out of the office and able to enjoy their own lives.
From that point on, well no spoilers but you only have to have seen one other romantic comedy to know that; the bosses will get together, working together will cause the assistants to develop feelings for each other, the bosses will split up, the assistants will fight and everything will need to be wrapped up in a big bow by a dash to a public place for a declaration in front of many people...
What sells the film is the lead performances of Zoey Dutch and Glen Powell.
Both have been grafting for several years with bit parts and supporting roles in the likes of Everybody Wants Some, Dirty Grandpa, Hidden Figures, Expendables 3, etc. This is their first mainstream lead role and they carry it off with aplomb. Convincing in their characterisation on their own and generating great chemistry together.
Deutch gets a bit more to do but that it is not too surprising given the film is written and directed by women (Katie Silberman and Claire Scanlon respectively).
Lucy Liu also gets more character development than Taye Diggs, who is rather more of a stereotypical cinematic boss. Liu however is seen as a strong, powerful businesswoman who has made a successful career for herself. Albeit at the sacrifice of her personal life and this duplicitous scheme by Harper and Charlie might just show her that she is worth more than just a career.
If anything, the film tries to show that work isn't everything and it is important to have a life outside of work... or at the very least, find a job/career that makes you happy.
So while relaxing after a hard day's work or typing up that dream job resume, you could do worse that setting up a viewing of this romantic comedy on Netflix.