Sicario 2: Day Of The Soldado - review 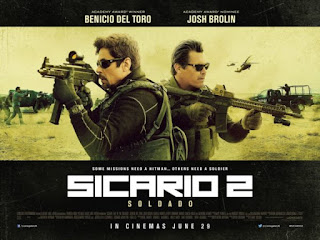 Following the breakout success of Denis Vileneuve's Sicario, Soldado looks to continue the story. Expanding on the battle for the US/Mexico border, the focus of the saga moves from Emily Blunt's character (missing from this film) to Josh Brolin's Matt Graver and Benicio Del Toro's lawyer-turned-assassin Alejandro.
Following a bombing perpetrated by terrorists smuggled across the border, the US government classifies the Mexican cartels as terrorist organisations. Allowing Graver carte blanche to instigate a war between the cartels to try and take them all down.
But a bungled kidnapping puts the two former allies at odds that could put this fragile alliance to the ultimate test.
Taking over directorial duties, Stefano Sollima (director of Italian crime dramas such as Gomorrah, Romanzo Criminale and Suburra) is initially able to recreate that incredible feeling of tension and unease that the original film had. A film that felt like a coiled snake ready to strike at any moment.
This is particularly evident in a sequence where the US team attempt to transport a kidnapping victim back across the Mexican border only to be attacked by the police. This is equivalent of the border crossing sequence in the first film and just as effective.
What is less effective is the dawning realisation of just how right-wing the film (and saga) is in terms of its politics. The issue of the US/Mexico border and separation of families is obviously a very tender subject at the moment and the film is not particularly balanced in announcing which side of "the wall" it stands on. Following the initial bombing of a Costco on US soil, the government manage to frame the narrative in a way to allow them to wage war with the Mexican cartels, even though they were not the ones who physically carried out the bombings.
This is potentially why a large proportion of time is spent attempting to humanise the characters of Brolin and Del Toro. Particularly Alejandro as he develops a paternal bond with Isabella, the kidnapped daughter of a cartel boss. Del Toro is unsurprisingly excellent in the role. However the issue is that based on their actions in the first film, these people are already way beyond redemption.
Which is what this film is.
For it is difficult to remember a film in recent memory that has capitulated so fast in the final act.
Honestly, there is a particular moment from which point the entire film deflates faster than an undercooked souffle that you are left questioning just what the filmmakers were thinking.
There was a huge amount of excitement and potential for this sequel. Unfortunately Sicario 2 is less Day of the Soldado and more Day of the Sol-dud-o.