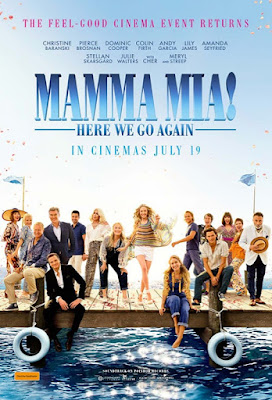 Where do you begin with a film like Mamma Mia: Here We Go Again? A film which is critic-proof with a guaranteed audience? Is it possible to hold it up to the same standards as other summer blockbusters?
Will simple things such as plot and characterisation matter when this movie will make a ton of Money, Money, Money?
The simple answer is... No!
Here We Go Again is simultaneously a sequel and a prequel to the unexpected smash hit based on the jukebox musical.
The issue with following that is the musical wasn't planning on any follow ups so they cherry picked the best songs first time round. Once you get through classics like Waterloo and Mamma Mia, you realise that they've exhausted the ABBA Gold album and you are left with the likes of I've Been Waiting For You and, er, Andante, Andante?
However the biggest problem with the film is the giant gaping plot holes visible from space.
For example, Donna's mother is referred to in the past tense in the first film but is alive now. How?
There are multiple references to events between Meryl Streep's character and her three lovers in the original that are forgotten about here. It's as if the screenwriters did not go back and watch it before putting pen to paper (or fingers to keyboards).

Instead, all they seemed to focus on was shoehorning in ABBA songs into a back story that explains the origins of Donna's dungarees. So it will surprise absolutely no one that there is a character called Fernando in this.
Then there is the timeline. My word the timeline. If fans have issues with the complicated Marvel Cinematic Universe (MCU) timeline, they are nothing compared to the Mamma Mia Cinematic Universe (MMCU).
Starting off with Donna and the Dynamos at University in 1979, in which they sing I Just Kissed The Teacher that is an incredibly problematic song in that it implies the abuse of a child and would result in expulsion or jail time for the teacher involved.
If Donna meets the three men in late 1979 and has her baby in early 1980, this would make Sophie (Amanda Seyfried) 38 years old in this film set in 2018.
However, in the original set in 2008, Sophie is said to be 20 years old. Meaning that she was born in 1988.
Bit of a head scratcher huh? But it makes sense in order to cast younger versions of their characters with actors in their mid-twenties.
Of the younglings, particular praise goes to Jessica Keenan Wynn and Alexa Davies as the young Christine Baranski and Julie Walters, who absolutely nail it.
The rest of them don't fair so well. They are all perfectly capable actors but you never really buy into them becoming their older incarnations. Why cast Josh Dylan as a young Stellan Skarsgard when you could have actually cast one of his sons like Alexander or Bill?
Oh yeah, and let's not forget the Streep shaped elephant in the room. The main talking point from the trailers before the film was released. Yes. It's true. It's all true and thrown away with a minimal amount of dialogue that it is genuinely shocking and you won't believe it is real all the way through.
But in spite of all of these negatives... it is impossible not to get swept along with it all and leaving with a smile on your face and a spring in your step. And a lot of that comes down to one single reason.
Cher.
From the moment she arrives on the Greek island dressed as Lady Gaga, the whole thing shifts up a gear.
Have you ever been at karaoke with a group of friends, all having a laugh and enjoying yourselves, when one friend gets up and takes the whole so seriously that you wonder why you even bothered showing up?
That is exactly how the rest of the cast musty have felt when she started blasting out Fernando.
She is on a whole other level and like the Ronaldo or Messi of the Mamma Mia ensemble.
The whole gang are enjoying themselves though and director Ol Parker gives it a technical flourish with some editing transitions, particularly in the musical number One of Us, that are superb and seem like they are deserving of a better film.
Some critics have called this The Godfather Part II of musicals. Understandable given its prequel/sequel storyline but also because it makes you an toe-tapping, OTT, enjoyable offering you can't refuse.