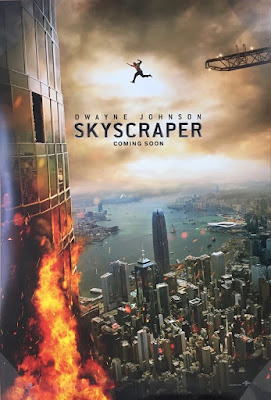 Dwayne Johnson, the most electrifying man at the box office, returns to the big screen this week with Skyscraper. It is not a film adaptation of Demi Levato’s musical banger but a movie that finds Dwayne stuck between The Rock and a Die Hard place.
Johnson proves for the second time in 2018 that age or background is no obstacle to a late career change as he moves from FBI agent to security consultant. In Rampage, he went from Special Forces to Primatologist. Never let anyone tell you you can’t dare to dream!
On a job in Hong Kong, he has been tasked with analysing the security of The Pearl. The world’s tallest building. To do that, he has been living in the residential area of the complex with his wife (Neve Campbell) and two children.
Just before the building is signed off for opening, Will Sawyer (Johnson) is framed for a fire that starts to rise through the Pearl, trapping his family.
He stops at nothing to get back into the building to save them. However the fire is a mere distraction because the real purpose of the event is to allow a group of criminals to steal a valuable object from the Pearl’s owner Zhao Long Ji (Chin Han).
At this point I know what you are thinking. Burning building, criminals, tall building, man needing to save his family.
All you would need is for The Rock to be barefoot and this would be Die Hard. Well actually, The Rock only has one foot and an artificial leg in this due to his backstory!
The filmmakers are well aware that this film is essentially a modern blend of two classics.
It wears its influences not on its sleeve but plastered to the outside of a very tall building. It is a throwback to the dumb, can-be-described-in-one-line, action movies of the 80s and 90s that works on many levels… 220 levels to be exact.
Any film that emulated the Die Hard concept could be described as “Die Hard on a boat” (Under Siege), “Die Hard on a Plane” (Air Force One), etc. So Skyscraper is “Die Hard in the Towering Inferno”.
So much in fact, that Johnson released these two posters before the film’s release, heading off any potential criticism… 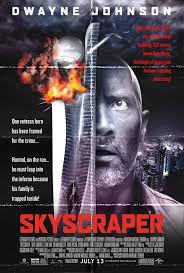 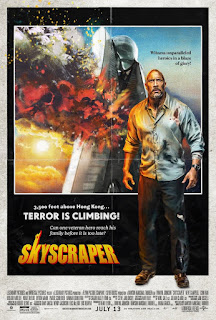 Rather than focusing on a disaster movie style film with thousands of people trying to evacuate a burning building, Skyscraper jettisons 220 storeys to focus on just one. The good old Harrison Ford-esque “I just want my family back” and it is the role that Johnson is born to play (and has played for many, many films).
The first third of the movie sets up this story of Will and his family in the building, along with the main players (owner, former colleague-turned-boss, slimy insurance agent, etc) and anyone who has seen any of these films will be able to spot a wrong-un straight away. It also mentions lots of plot points about the building in that Aliens-style way that will come back later e.g. oh Ripley can drive a power loader, wonder if that will be important come the finale? Like the giant indoor room that features reflective computer panels that can replicate multiple versions of whoever is inside? Hmmm.
Once the building is on fire, Sawyer escapes the clutches of the police to climb a Super Crane in order to jump into a burning building. 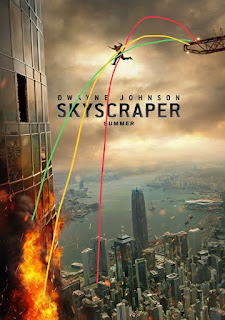 The initial poster image was the source of some ridicule with mathematicians speculating on the angle and trajectory of the jump but it works much better in the context of the film and feels “just about” believable but hey, this is the movies. It is the kind of big punch-the-air moment that Hollywood is famed for and even if the audience in the cinema don’t cheer, the huge crowd of people gathered in Hong Kong watching the action unfold on giant plasma screens certainly do.
Once back inside, the final act becomes Die Hard with a vengeance as Johnson simultaneously tries to rescue his family and take down the criminals who are led by one with a European accent.
Rolland Moller (excellent in the Oscar nominated Land of Mine) is a charismatic and physical threat but sadly no one can ever come close to Hans Gruber as this type of villain.
Elsewhere there are several direct nods to the Bruce Willis classic that include hanging out of windows tethered to heavy objects and improvised uses of duct tape (one that would actually put Tom Cruise in Ghost Protocol to shame).
What Skyscraper does lack in comparison to Die Hard is the humour and one liners. This film is played fairly straight. Almost in an Airplane style but it really could have benefited from allowing The Rock to lay down some one liners on these criminal Jabronies as well as the physical smack down.
What was heartening to see however was the development and characterisation of Sawyer’s wife played by Neve Campbell. In most films of this type, she would be nothing more than a damsel in distress but she, as a former soldier and combat medic, is capable of handling herself against the bad guys and actually proves herself just as heroic as The Rock, particularly in one moment that will have fans of The I.T. Crowd giving a standing ovation.
Skyscraper might be skyscraping the barrel in terms of inspiration but Johnson once again proves he can carry a cheesy, summer blockbuster like this on his Atlas-like shoulders.