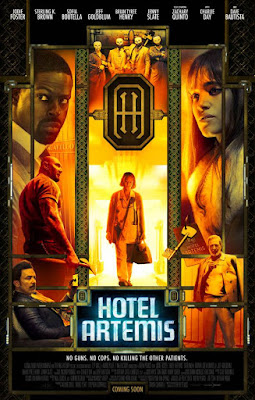 Checked in to the Hotel Artemis on Saturday for a one night stay. It had been recommended to me because I was a fan of the Hotelier's previous establishments (Iron Man 3, Mission Impossible Rogue Nation).
It is a private members hotel that feels very similar to The Continental in Manhattan, New York which I had previously visited in 2014 and 2017.
Both are famous for their house rules that all guests must abide by. Here they include "No disrespectful words or actions allowed against staff" and "While on the premises, no fighting with or killing the other guests". Which only seems fair and implied at every Travelodge around the world too.
First impressions were good even if the place was a little run down around the edges. It had a speakeasy-kinda-vibe to it; Art-Deco design and furnishings, secret entrances, hidden passages.
What it has in atmosphere, it is lacking in amenities. Don't expect a fully stocked bar or fine dining restaurant. This is a place you come to when you are feeling down and they will fix you up.
It is very much designed for people looking for a quick getaway.
Having said that I did spend a lot of time speaking to a older staff member called "Nurse". She reminded me of Jodie Foster and I really got to know her character as she regaled me with tales of the hotel, its various guests and also spoke fondly of her son Beau. Sadly due to agroaphobia, she had not left the hotel in 20 years. However she was working on it thanks to some 'dealing with anxiety' tapes given to her by a fellow staff member nicknamed Everest (you will understand when you see him).
Although there are only five suites in the hotel, it was a busy night at the Artemis when I stayed with a number of other guests roaming the halls, all going by their suite names i.e. Nice, Waikiki, Acapulco and Niagara.
While Acapulco was incredibly loud, brash and rude, Nice and Waikiki seemed like decent, honourable folk and it was a pleasure to spend some time with them.
Things ended rather riotously when a group of unwelcome guests arrived after a late night out and didn't take to kindly to being refused entry.
Overall though, it did not dampen my stay as the staff looked after us all very well.
Some upgrading and refurbishment is required before I would stay again but I may very well check out their sister establishment in Vegas.