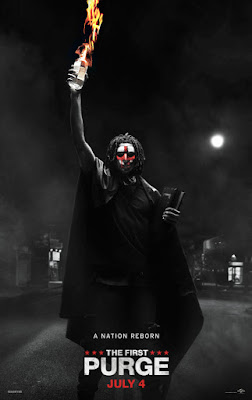 Who knew that five years ago when The Purge was released, a high concept horror about a vision of America where all the violence and hatred was released in one night, that it would go on to become the most socially relevant and prescient franchise of the last decade?
Shockingly, what started out as a film listed as "Science Fiction" on Imdb.com, the concept and events witnessed in the four movies have become increasingly plausible and realistic.
As the franchise has grown and evolved, any pretence of being influenced by real world events has disappeared. While The Purge was self-contained and The Purge Anarchy broadened the scope of the action, in 2016's The Purge: Election Year had a female presidential candidate under attack from right wing Purge fanatics wanting to preserve their way of life.
In The First Purge, we witness the very first iteration of the experiment that would define a nation. It is localised to Staten Island and offers citizens $5000 to remain on the island during the experiment, along with higher incentives for active participation.
Much of the action is focused on one of the "Projects" and the African-Americans who live there. They are the ones that need the money most but what the Government don't count on is the sense of community within these areas. They would rather stay together in churches or host street parties dancing to "This Is America" than participate (okay, maybe not quite).
Yes, these people are angry. But not at each other, at the government.
When participation is deemed too low. The New Founding Fathers Association (NFFA) send in groups of white mercenaries disguised as the KKK and other racist organisations to wipe out large swaths of the population.
Only when their livelihood and lives are threatened, the community decides to fight back. Ending in a third act that sees a drug dealer D'Mitri (hey, drug dealers can be good people to) strip down to a white vest and go all John McClane in an apartment block.
I mean, it makes sense. Can't sell drugs to the community if there is no one left in the community!
Jokes aside, given everything that has happened (and is happening) in these communities in America over the last few years, this film feels chillingly real and that is what is truly scary.
"Just remember all the good the Purge does" i.e. makes perfectly adequate action/horror movies with a disturbingly authentic political subtext.