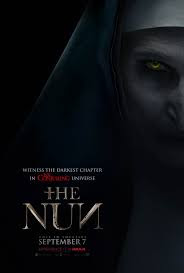 The Nun is, somewhat unbelievably, the fifth film to come out of 2013's surprise horror hit The Conjuring.
Similar to the Annabelle doll that featured in the original film, the evil spirit Valak first appeared in The Conjuring 2 and has was deemed suitably terrifying enough to earn her/his own spin off. One which debuted at the top of the US box office last week.
At this point, The Conjuring Universe is second only to Marvel Studios, and is putting the DCEU's efforts so far to absolute shame that the powers that be at DC should pray for forgiveness.
The film opens with an effectively creepy beginning where some terrified nuns in a Romanian abbey are attempting to vanquish an evil spirit that lives within the depths of the holy ground. Suffice to say that it does not end well, climaxing in a truly haunting shot.
Word of the deaths reaches the Vatican who dispatch Father Burke (Demain Bichir) and a young nun (Taissa Farmiga) to investigate, along with the help of "Frenchie", the roguish French-Canadian villager who made the horrific discovery.
By the time they reach the Abbey, Valak's power has already grown strong and begins to get into the heads of the visitors, all of whom are haunted by their own pasts as well as the ghostly Nun that stalks the corridors.
Director Corin Hardy has delivered a horror that comes in at just over the 90 minute mark but it would be fair to say that even though the audience have paid a lot of money for their seat, they will only be sat in it about half the time. The other half they will be jumping out of it.
That is because, rather than building that unnerving sense of dread that slowly creeps up your body until it is frozen rigid in fear, the film opts to go for the tried-and-tested method of quickly build tension before employing a jump scare to create that cathartic release.
Build. Jump. Scream. Repeat. Build. Jump. Scare. Repeat.
A really good jump scare can be one of the most effective and enjoyable scares you can get in the cinema e.g. the bum behind the diner in Mulholland Drive (fun fact: also played by Bonnie Aarons who is Valak), the Blood Test in The Thing, "Night Vision" in The Descent.
The problem comes when there is an over-reliance on them, thus diluting the effect. There is actually a website called Where's The Jump? that details exactly where the jump scares are in horror films and it has recently posted The Nun on the site and it lists a total of 29! Which is one jump scare every three minutes!
To give credit where credit is due, the majority of them do land but it is to the point of exhaustion.
Beyond the relentless onslaught of jumps, the biggest issue in the film lies with the lead actress Taissa Farmiga. Now there is absolutely nothing wrong with her performance. In fact she is very good and apparently the filmmakers have stated that though they auditioned many people, she was the best one for the role.
The issue comes from that with the film being set before the first Conjuring, and Taissa being the younger sister of Vera Farmiga who plays Lorraine Warren in the series. I kept finding myself thinking I was watching a prequel which sets up her character. Only that it isn't. Her name is Irene. Lorraine wasn't a nun. Yet that niggling feeling that the film is setting up for a big twist remained.
However thankfully, it did not go down that road. Instead tying into the franchise in a different and much more clean and effective way.
The Nun is an effective but unimaginative horror thanks to its over-reliance on jump scares but I guess old habits die hard!