The Spy Who Dumped Me - Review 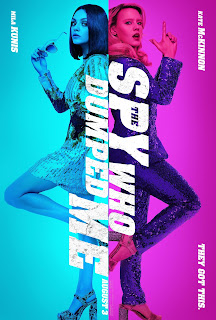 With a title like The Spy Who Dumped Me, the Spectre of the world’s most famous spy might loom large over this but beyond a gender-bending twist on an iconic poster shot, it has much more in common with Melissa McCarthy’s Spy. It also achieves something a Bond film never did and has something it's never had. It passes the Bechdel Test with flying colours thanks to two well-written, fully developed strong independent female characters!
Mila Kunis is attempting to get over being dumped over text by Justin Theroux’s Drew, only to discover that he is a spy in the CIA and sends up involved in a plot to deliver a mysterious package to a mysterious buyer in Europe with her manic, crazy best friend Kate McKinnon along for the ride.
It is refreshing to see a movie written and directed by women, which although at times is a generic action comedy, features such a strong, convincing female friendship which is about regaining control and self-belief and not being defined by a relationship with a man. Either the super spy from her past or the dashing British agent hunting them across the EU.
The film sparks when Mila & Kate share the screen and features great supporting turns from Gillian Anderson as an M-style boss of MI5 and Ivanna Sakkho (who is definitely NOT Elizabeth Olsen) as a Russian assassin.
It is almost like you do not need the men at all and to be honest, Justin Theroux and Sam Heughan (Outlander) hardly register in terms of screen presence in comparison to the chemistry between Kunis and McKinnon.
The spy plot is incredibly generic as we see the two women become fugitives from the police and forced to travel hop across Europe from one set piece to another, experiencing plot twists and developments seemingly recycled beat-for-beat from Spy and, bizarrely at one moment, Zoolander.
There is also some jarring tonal shifts in terms of language and violence as it struggles to decide if it is a PG-13 action comedy or R-rated comedy.
Easily gets two stars, one for each of its leads, but in terms of a sequel? Certainly Never Say Never Again if they figure out exactly what their target audience is but until then it might be For Your Eyes Only.