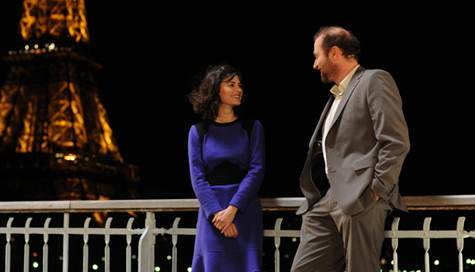 Audrey Tautou plays Natalie Kerr, a young woman in love and happily married to the handsome, charming Francois. When Francois is killed in an accident, Natalie pours herself into her work. Accused of never letting anyone in by her smitten boss, she impulsively kisses a co-worker. Will this random act show Natalie that there is life after 'the one'?
After getting over the fact that Audrey Tautou looks identical to when she played Amelie some 11 years ago (I don't what they put in Chanel No. 5 but it must be very good), she convinces as the fragile, grief stricken widow but slowly that trademark ingenue smile starts to creep back onto her face, thanks to her burgeoning relationship with Swedish employee Markus.
Damiens may be familiar to UK audiences for comic supporting roles in Heartbreaker and OSS:117 but makes the transition here to leading man, even though he may not be your typical romantic lead (Not meaning to sound harsh but if there was a Hollywood remake they would probably cast Paul Giamatti). What he may lack in looks, he more than makes up for in an unassuming charm and humour that really makes the audience root for him to get the girl, albeit it one who is out of his league.
He also gets one of the best moments in the film with a little fantasy sequence reminiscent of (500) Days of Summer.
The two leads have genuine chemistry between them, helped by a script by Foenkinos, adapting from his own novel, that has a smart ear for dialogue that comes across as honest and authentic, which is where a lot of romantic films fall down.
Whilst marketed as a rom-com, it doesn't follow the traditional structure and the gentle humour of the mismatched couple can sometimes feel at odds with a story which is just as much about dealing with loss and the spectre of her former husband threatens to derail any permanent chance of romance .
Overall, the tone doesn't quite gel together but the great chemistry and a refreshing unwillingness to follow cliche, with characters who are savvy enough to know what the audience are thinking and an ending that is left open to their interpretation rather than having everything tied up in a bow, means that Delicacy is a tasty treat to consume at the cinema but you might not be craving seconds.