Salmon Fishing In The Yemen - review 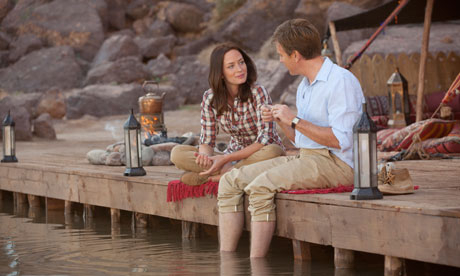 Based on Paul Torday's best selling novel, this film tells a literal "fish out of water" story as fisheries expert Dr Alfred Jones and financial consultant Harriet Chetwode-Talbot are tasked by a Shiekh to introduce salmon fishing to the Yemen, which is not known for its natural abundance of water.
It starts with an In The Loop style sequence of emails passing back and forth discussing the feasibility of the scenario and Kristin Scott-Thomas's goverment press officer, think Malcolm Tucker only with slightly smaller balls and 12A certificate to restrict the more colourful language, sticking her oar in to generate some positive feedback in the Middle East.
From that point on however, it rejects the political commentary and satire in favour of your typical British 'stiff upper lip' romantic comedy.
It might lack bite but Salmon Fishing is a warm, fuzzy, sweet film with a strong romantic bond between the mis-matched pair of stuffy, unhappily married Dr Jones (McGregor, who is starting to find himself as an actor in his middle age) and the younger Harriet, whose soldier boyfriend has gone MIA in Afghanistan.
I know what you're thinking now, and yes the plot unfold exactly as you imagine it would, but the pedestrian, unimaginative plotting is forgiven thanks to the chemistry between the leads, with Emily Blunt once again proving to be one of, if not the, finest actresses in the UK.
There is great support from Amr Waked in a wonderfully non-stereotypical performance as the Sheikh and Scott-Thomas attempts to chew through the scenery every time she appears.
Now I'm not sure the only one who will do this when watching the film, but I found myself chuckling whenever someone called McGregor's character Dr Jones as it conjured up images of him as Indiana Jones. There is even a gag about digging up the Ark of the Covenant. I was just hoping that at one point Blunt would have said to Ewan, " No time for love Dr. Jones!"... Perhaps the opportunity will arise in the sequel, Salmon Fishing In The Yemen 2: Fish Harder.