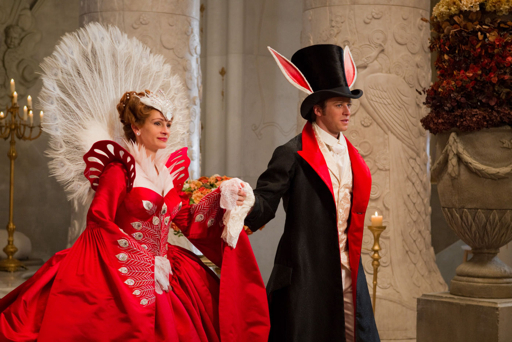 I think it is safe to say that I was polishing my poisoned apple ahead of this screening thanks to Mirror Mirror having some of the worst trailers I've seen so far this year and suffering unfavourably in comparison to the "other Snow White film" out later this year, Snow White And The Huntsman.
However it seems i should have listened to my own advice about not judging a film by its trailer, because it appears that someone has managed to achieve the impossible and polished a turd because the final product is much better than I was anticipating.
Performances are good. Julia Roberts is clearly having a ball as the wicked Queen/step mother and Arnie Hammer puts in a (Prince) Charming comic turn as the dashing, but dumb, Alcott.
I should really apologise to Lily Collins because I was quite harsh on her in my review of Abduction last year, but I am now willing to put it down to that just being a really awful movie because she is adorable as Snow White and has excellent chemistry with Hammer and a good rapport with the dwarves (the majority of whom sadly get the chance to make an individual impact).
It wasn't until reviews for the film started coming out that I realised she was the daughter of one of Patrick Bateman's favourite artists, Phil Collins. She is easily the best thing that he has produced in years.
Although she still has one of the most prominent and distracting set of eyebrows in Hollywood!
Tonally it it still a little unsure of itself, flitting between Shrek-style fairytale parody and full-on pantomime, but it is fair to say, as with all Tarsem Singh films (Immortals, The Cell, The Fall) that Mirror Mirror is definitely a case of style over substance but it is hard to resist its charms when it is styled as well as this. 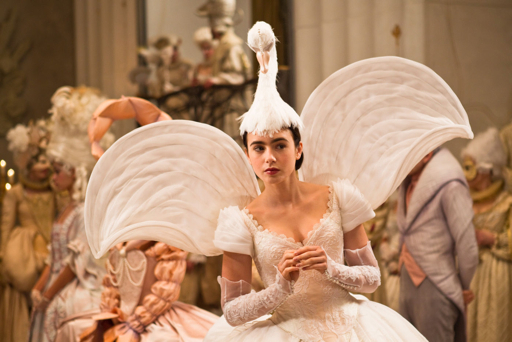 Julia Roberts has more costume changes than a Lady Gaga concert and the Queen's Animal Ball features outfits like Snow White's swan dress that would be Bjork's Oscar night wet dream.
The late Eiko Ishioka, Singh's regular costume designer, sadly died before seeing the finished film but I truly believe that a posthumous Oscar nomination is on the cards for what is undeniably the most extravagantly and opulently dressed film of the year and deserving of 5 stars on their own.