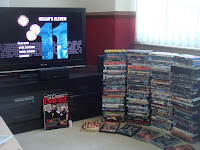 Today I begin my challenge of watching all 500 films on the Empire 500 Greatest Films Of All Time list, as inspired by the film JULIE & JULIA.  The challenge has been described as genius/madness/incredibly geeky (delete as applicable).
Before I start, here are the rules:
1) Each film on the list must be watched (at least) once during the 365 days.
2) I must start at number 500 (Ocean's Eleven)
3) I must finish with number 1 (The Godfather)
4) I can watch the other films in any order I choose
5) At the end of each day I must post a blog stating which films I have watched and a review of each film.
To complete my challenge I will need to watch an average of 1.3 films a day.  I am armed with 150+ DVDs from my own collection, a Lovefilm list of nearly 300 titles, a lot of caffiene and takeaway pizza.
To view the complete list of 500 films I'll be watching go to http://www.empireonline.com/500
Take it away George...
Posted by Dallas King at 07:22