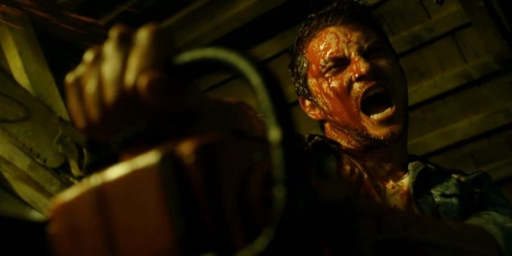 A man called S. Leonard Rubenstein once said "Curiosity is a willing, a proud, an eager admission of ignorance".
Never has that phrase been more true than in the genre of the horror movie.
Curiosity is what causes people to wander around in the dark when they hear a strange noise.
Curiosity is what causes people to ask "who's there?" when it can only be the killer.
Curiosity is what causes people to read from a book bound in human skin that has repeated warnings inside telling them NOT TO READ FROM THE BOOK!
And curiosity is what killed the cat... rather emphatically in the case of Evil Dead (2013), as there are dozens of dead cats strung up in the basement of a cabin in the woods where five hot young kids find the Book Of The Dead wrapped up neatly in black bags and tied up with wire.
Everything about this situation says "put it down immediately and get the f*ck out of Dodge", but they won't. Everyone knows they won't. They could try and leave but the way will be shut. They HAVE to read from the book.
Why? Because if they didn't then we wouldn't have a movie AND because this film exists in a post-Cabin In The Woods world.
There was always going to be a danger that a film such as Evil Dead would suffer following Joss Whedon and Drew Goddard's take on the horror genre, but it actually stands up very well and feels like it could have been one of Hadley & Sittersen's successful appeasements to the ancient gods.
It succeeds because it knows what its purpose is and pays attention to the dialogue spoken by Dana, the final girl in Cabin, upon realising their fate "They don't just want to see us killed. They want to see us punished."
And "punished" would be a very mild word for what happens to the kids in Evil Dead.
There are needles, nailguns, nastiness, mutilations, disfigurations and amputations galore in this deliriously deranged and violent body horror that is fully deserving of its 18 rating.
Director Fede Alvarez deserves credit for sticking to his (nail)guns and not cutting back on the gore front. Also for the decision to film everything using practical effects wherever possible rather than going with the CGI option which heightens the 'ick' factor.
As a fan of the horror genre, it is refreshing to see a film like this that embraces its video nasty roots rather than compromising in order to get a lower certificate to increase box office or overuse CGI effects at the expense of practical work.
I have always been a firm believer that practical trumps CGI every time, as evidenced if you compare the original The Thing vs the 2012 prequel, and I'm glad this director is of the same mind.
Yet it is not just gore hounds that Alvarez needs to satisfy with this film. There is a shadow cast over the film by the original Sam Raimi version and one of the most distinctive chins in the business in Bruce Campbell's iconic Ash.
Now this is where a few feathers might get a little ruffled. *in a hushed whisper* The original The Evil Dead is not actually all that great.
Rewatching it recently, yes it is incredibly violent and creative in its use of gore on a minuscule budget, but once you get past the elements that made it one of the original video nasties, some of the acting and filmmaking is rather amateurish.
This is not a slight against Raimi, Campbell, et all. They have admitted as much themselves (after all it was their first film) and I consider Evil Dead 2 to be one of the greatest horror movies of all time with Campbell's manic turn as Ash one of the great horror performances and a masterclass in physical comedy.
It is one of those classic horror films of the seventies and eighties that actually could benefit from a remake, and Raimi & Campbell essentially remade it themselves in the first 10 minutes of Evil Dead 2.
And yet the 2013 Evil Dead could argue its case that it is neither a remake nor a reboot of the franchise.
Between a pre-credit sequence featuring a family trying to exorcise a Candarian demon and the fact that when we are first introduced to the character of Mia she is sitting on top of a broken down Oldsmobile (is it Ash's car?), this leads towards the idea that they are simply the latest group of people in a long line of those who have fallen victim to what is released from the Book Of The Dead.
Alvarez (with a script polish from Diablo Cody) does a fine job on the balancing act of paying tribute to the original film yet at the same time putting his own stamp and twist on the material.
This is apparent from our introduction to the main characters with their reason for visiting the cabin in the woods being to help Mia (Jane Levy) quit her addiction to drugs cold turkey.
This allows for the group to initially doubts Mia's claims of there being "something in the woods" and subsequent demonic behaviour as products of her imagination and deteriorating physical and mental state due to the detox.
However Eric (Lou Taylor Pucci who kept making me think I was watching Jared Leto) has read from the book and soon realises something more serious is happening once Mia starts vomiting blood and slicing her tongue in half and giving her friends French kisses.
"Something is attached to Mia's soul. In order to help her, we're going to have to kill her." 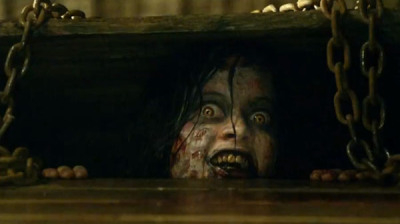 Sam Raimi always delights in reporting how much he would torture his friend Bruce Campbell during the filming of the Evil Dead movies but its possible that Fede Alvarez has gone to even further extremes with actress Jane Levy.
Between being brutalised by a tree or being buried alive, Levy delivers one of the greatest horror performances of recent years, perhaps even of all-time.
Not only does she go through an incredible physical transformation but the emotional range of her role is extraordinary, going from vulnerable, exhausted girl we meet at the beginning of the film to the anxiety-ridden and paranoid addict in the grips of a heroin comedown to the demonic host of evil determined to destroy her former friends. At times it felt like there were three different actresses playing the various stages of Mia, she just becomes that aspect of her character and disappears into the role completely.
Unfortunately the characterisation of the rest of the group is not as strong or well developed.
Pucci's scholar Eric gets the film's best lines and much of the (admittedly dark) humour and Shiloh Fernandez gets a nice storyline as the absent friend and brother has to become the reluctant hero (complete with blue denim shirt) with the realisation that in order to save the day it may involve cutting up his sister and girlfriend.
The two other female characters sadly don't come off as well with Elizabeth Blackmore's Natalie in particular being rather forgettable until it is her turn to become deadite fodder.
However this is just a minor criticism given this particular type of horror movie and the purpose that the majority of the characters have within the plot i.e. to be killed in dramatic, gory fashion.
In Cabin In The Woods, the teenagers are offered up in sacrifice to the ancient gods and it would be fair to say that I think they would be very satisfied with this gratuitously, gloriously gory offering that climaxes with it literally raining blood, the appearance of a chainsaw and a soundtrack featuring an air raid siren (which will undoubtably become the new "InceptionHorn" staple of film trailers).
It may not have been an offering that many people would have initially wanted but the end result is certainly not an unwelcome one. Under the guidance of Sam Raimi and Bruce Campbell as producers, Fede Alvarez's fresh take on the material has resulted in easily the best horror remake since 2004's Dawn Of The Dead.