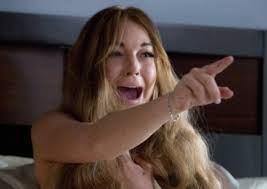 The majority of the running time for Scary Movie V was spent doing two things:
a) composing a letter to Entertainment Film Distributors outlining my intention to sue them under the trades description act and b) trying to figure out exactly when this movie had been filmed.
Seemingly beginning with the Paranormal Activity films as their main target, it suddenly decides to use the plot from the film Mama which was only released in February, also including "parodies" of the new Evil Dead film which is actually released a week AFTER this film in the UK. In a desperate attempt to try and be up to date and given the quality of the script, performances and filmmaking, it is entirely possible that it had been filmed over a couple of days last week. I can just imagine that in Scary Movie VI, they'll be parodying horror films that haven't even been made yet.
On the other hand the film, which comes from a series that originally started as a parody of horror movies, spends considerable screen time spoofing films like Rise Of The Planet Of The Apes, Black Swan and Inception with the entire film being narrates by a guy who sounds like Morgan Freeman, why? Despite only being 2-3 years old, the references feel almost completely out of date compared to the horror references. And they have no relevance within the story being told. They just feel shoehorned in. Some of them could possibly have had merit if the referencing had led to actual gags but the laziness of the script seems to think that simply going "Hey look it's that guy from Inception", that is enough to merit a laugh. It is not.
The Rise Of The Planet Of The Apes parody only seems to be there so they can have a running gag about monkeys throwing their shit against the wall.
Sadly this seems to have been what happened during the writing process for the movie: throw any "joke" about sex, drugs, bodily fluids, etc against the wall and see what sticks.
The parody film genre has become a pale shadow of itself from the days of Airplane and The Naked Gun. 33 years on, Airplane remains one of the funniest and most quotable films of all time. As for Scary Movie V? Well let's just say "looks like I picked the wrong week to quit sniffing glue!"