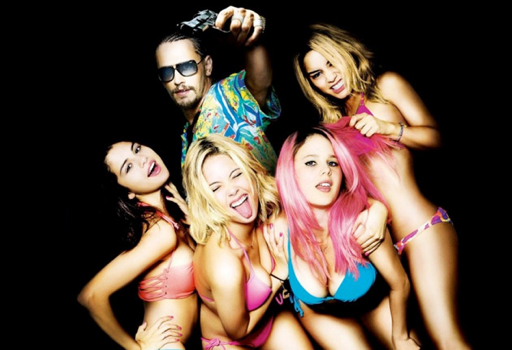 Around half an hour into Spring Breakers the four "Disney Girls Gone Wild", are partaking in a copious amount of drinking and drug taking (all portrayed in slow motion with a "bangin" soundtrack) and I started to think I made a huge mistake and was witnessing another Project X, one of my most hated films of 2012.
But then something happened. James Franco turned up. James Franco turned up looking like Drexl from True Romance, playing a character called Alien and delivering a performance that was not only from another planet but from a completely different movie.
He is the ultimate Gangsta cliche. A white guy with corn rolls, watching Scarface on repeat, dealing drugs, pimpin' on a bed covered in money and guns while "looking at my shit!".
And then he sings a song to motivate his "Spring Break Bitches". What will it be? Jay Z? Tupac? Lil Jon? Nope, a piano solo version of Everytime by Britney Spears that becomes the backdrop for a montage of their criminal exploits.
This was the moment that I started to understand what director Harmony Korine was going for with this film, although it took me a few hours of contemplation to truly make my mind up.
Spring Breakers is not a movie about Spring Break but in fact a movie about what everyone believes Spring Break to be.
The film is incredibly OTT, sexualised, violent, exploitative and completely unrealistic... but that is the point.
What Korine has created is akin to Grand Theft Auto: Spring Break.
There is a line spoken by one of the girls as the psyche themselves up to commit a robbery in order to fund their Spring Break trip - "Pretend it's a video game".
And that is how the film plays out, using gritty handheld camerawork intercut with more stylised backstory and plot sections, from being bailed out by a criminal, to characters exiting the game and finally the climatic scene that could have been lifted from a mission in Grand Theft Auto: Vice City.
Yes it undoubtedly appeal to a particular demographic who would love to live that lifestyle for real but the film is unafraid to point out how ridiculous it all is at the same time.
One of the lines repeated ad nauseum is "Spring Break forever", with the characters waxing lyrical about how they wish they could stay in this moment forever. But that is what Spring Breakers is. It's a moment. A highly entertaining one but a moment nonetheless. A snapshot of a certain place and time. One that can be enjoyed at the time but should never be taken as a way of life because, to quote another new release, "if you ride like lightning, you're gonna crash like thunder".