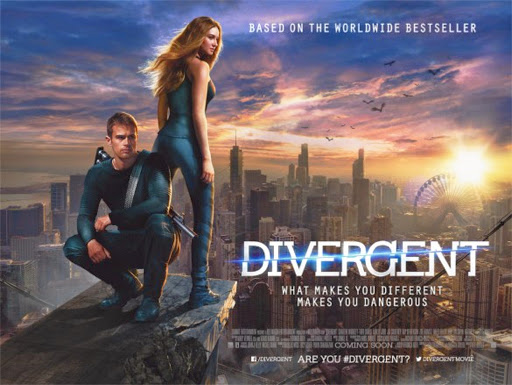 Another year, another adaptation of a "Young Adult" literary sensation aiming to take the crown previously held by Twilight and currently sitting atop the head of Jennifer Lawrence and Hunger Games.

So far the likes of Beautiful Creatures, The Mortal Instruments: City of Bones and The Host have failed to capture the imaginations of the critics, audiences or box office charts.

Is Divergent be able to go in a different direction? Sadly not.

In a future ravaged by a war, society is split into five different factions based on your personality. Abnegation the selfless, Dauntless the brave, Erudite the intelligent, Candor the honest and Amity the peaceful... although apparently some don't fit into a category because they are dressed like homeless people or can flit between categories and are called Divergent.

In a Harry Potter-esque Sorting Hat ceremony, all teenagers chose a faction on their 16th birthday. Tris (Shailene Woodley) discovers she is divergent and chooses to leave her Abnegnation parents behind and become part of the Dauntless group who spend a lot of their time practising parkour and wearing the latest All Saints collection.

There is a potentially interesting story here. The factions were created to prevent further conflict but what caused the original war? The society lives in a post-apocalyptic Chicago which is surrounded by a giant fence but what is its purpose? What is it keeping out? Or is it designed to keep them inside?

Unfortunately none of this really explored as the majority of the 138 minute running time is spent having the new Dauntless recruits go through extensive Hunger Games-style training.

With the book being the first in a trilogy, the film feels like nothing more than an extended first act with a undeveloped, tacked-on climax featuring a plot to eliminate one of the factions by a villainous clipboard-carrying Kate Winslet.

The one positive aspect however is the lead actress Shailene Woodley. She starts off fragile and unsure but slowly grows into a tough character, drawing on various Linda Hamilton/Sigourney Weaver action heroine qualities, and nails the emotional beats perfectly.

Divergent might not be able to differentiate itself from the YA crowd but it does have a stand-out lead. The main fault lies with spending so much time laying the groundwork that it rushes the climax... but let's face it, it's a problem that many young adults encounter early on.