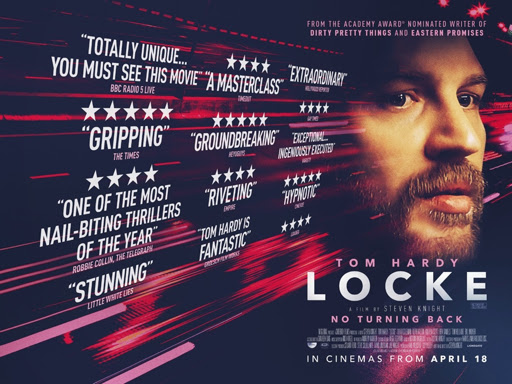 On paper, a film which just features a man on the phone in his car should not work at all. Thankfully Locke doesn't require any roadside assistance thanks to an excellent screenplay and mesmerising performance from Tom Hardy.

Ivan Locke is a building site manager who is responsible for creating structures which stand the test of time but sees his entire life collapse down around him over the course of one 85 minute car journey to London.

Tom Hardy is the only person on screen during the film and creates a fully realised character with the minimal of dialogue, backstory and a spot-on

Driving towards his final destination, Ivan tries to sort out a disintegrating relationship and career whilst safeguarding the creation of new life and a new build.

Who would have thought that having Bane trying to talk Moriarty through prepping a concrete pour would be one of the most interesting and exciting subplots of the year?

Tom Hardy never once lets his performance slip into cruise control as he subtly shifts through his emotional gears to cement his position as one of the UK's best actors.

From the off the film hits Top Gear and never lets up. This is one car journey you won't be asking "Are we there yet?".