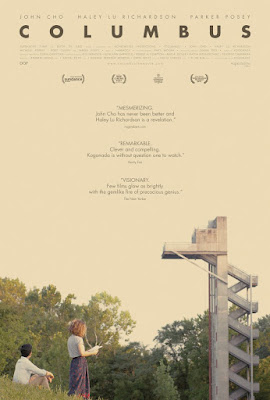 In 1492, Columbus went looking for India. He didn't find what he was originally looking for but it turned out to be a fortuitous stroke of luck that he discovered America.
In Kogonada's Columbus, two strangers are both searching for something.  A way out of their current existence. Instead they find each other and even though it wasn't what they were initially seeking, it turns out they were exactly what they were looking for.
John Cho plays Jin (with an N), the son of a Korean architect who arrives in Columbus, Indiana to visit his father who has suffered a stroke. It is clear that he would rather be anywhere else but is stuck there until his father recovers or passes away.
It is here that he meets Cassandra (although everyone calls her Casey), played by Haley Lu Richardson in what should be a breakout performance. Casey works in a local library but has the potential to excel in studies outwith the small town but she remains there to look after her mother who is a recovering drug addict.
Together the two of them form a bond walking around the town admiring the modern architecture that has made Columbus a mecca for design enthusiasts whilst building the foundations of a relationship stronger than the buildings around them.
Just like these visionary structures, Columbus looks absolutely beautiful. Every single shot has been carefully designed and constructed to enhance the viewing pleasure, delivering a sense of symmetry not seen outside of a Wes Anderson film.
For Jin and Casey, each of them could be one another's guardian angel and a reading of the story could be that Columbus is Purgatory. A waiting room for lost souls. Operating on a one in, one out policy that will see tough choices and sacrifices to be made in order for one of the characters to achieve their potential.
Writer-director Kogonada has previously developed short documentaries on filmmakers such as Anderson, Ozu and Linklater and it is easy to see their influence on his debut feature but has shown enough subtlety and craftsmanship to suggest he is the architect of his own career from now on.