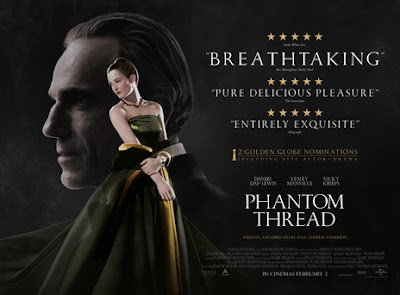 On paper, the design of Phantom Thread suggests a masterpiece. A creation of such exquisite beauty that it could grace the front of cover of Vogue as a work of art.
You have Paul Thomas Anderson. Writer & director of some of the greatest American movies of the last twenty years (Boogie Nights, Magnolia, The Master). And the man who won an Oscar as Daniel Plainview in There Will Be Blood, Daniel Day-Lewis in his final acting performance before retiring.
Only time will tell if this "retirement" is a definitive one or a Steven Soderbergh retirement.
However this tale of a tortured genius whose latest muse threatens to destroy everything he has created left this reviewer with a feeling of confusion and befuddlement.
It was a similar reaction as to seeing a haute couture, high end fashion statement come towards you on the catwalk. You can appreciate the time and effort and creativity that went into its creation but it leaves you wondering who on earth it is actually aimed at and who would wear it.
The film at times feels like it could become Fifty Shades Of Grey if it had been written and filmed by Merchant Ivory.
Day-Lewis's wonderfully monikered Reynolds Woodcock is a fashion designer whose creative genius is contained, controlled and channelled by his sister Cyril (Lesley Manville). A woman not above removing distractions and obstacles to his work, even if that includes his girlfriends.
It is clear who wears the tailored trousers in that relationship, as evidenced by one of the best lines of dialogue of 2018 when she warns him "Don't pick a fight with me, you certainly won't come out alive. I'll go right through you and it'll be you who ends up on the floor. Understand?"
Yet the Woodcock's perfectly patterned lives will soon be thrown into disarray when Reynolds discovers the young and beautiful Alma, who becomes his new muse. A fiery, fiesty character who doesn't need a corset to give her a backbone. Vicky Krieps gives as good as she gets and goes toe to toe with the formidable Day-Lewis, particularly during a dinner argument over asparagus.
The film is rather threadbare on plot but it doesn't need it. This is a character study sumptuously scored by Jonny Greenwood. One of a twisted and tangled love triangle where if the phantom thread is continually pulled, the whole thing will start to unravel.
Phantom Thread is like that stunning piece of clothing that you see in the shop window, convinced it will be perfect but when you get home and finally try it on, it just doesn't fit right. You wear it out once, just to check if it works but ultimately you'll return home to put it in your wardrobe never to be worn again.