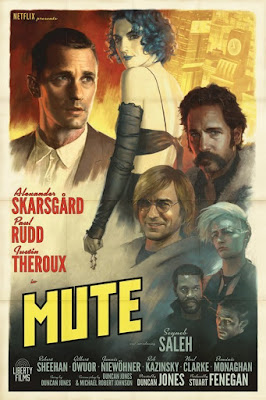 When Duncan Jones finally announced that Mute would arrive on Netflix in February, it ended the wait for his spiritual follow up to his debut Moon, one that began back in 2009 and at one point could have become a graphic novel until Netflix came along to allow Jones the opportunity to make the film he had always wanted to make, in the way he wanted to make it.
With the announcement, Jones debuted a poster he had commissioned for himself (above) that evokes the style of a '40s style pulp fiction novel or Warner Bros film noir.
Film Noir is a genre synonymous with men in sharp suits and fedoras, femme fatales, murder, betrayal, mystery and lots and lots of drinking. It might conjure images of black and white but the characters are anything but. Living in a world of more than fifty shades of grey.
But the hard boiled genre that has been transported successfully into other genres throughout the years including high school (Brick), stoner comedy (The Big Lebowski) and science fiction (Blade Runner).
Wearing its admiration for Ridley Scott's seminal film on its sleeve, writer-director Duncan Jones has created a futuristic Berlin that aesthetically feels like it could live in the same universe. Albeit one where Lunar Industries had taken over the Tyrell Corporation instead of Wallace Industries.
The greater influence is that of Casablanca. Just like the classic film, the city exists as a holding pen for the lost and. Those waiting and looking for a way out.

One such soul is Leo (Alexander Sarsgaard), a bartender who is mute due to a childhood accident which went without treatment due to his Amish upbringing. Leo's potential escape takes the form of cocktail waitress Naadirah, a woman who seems to love him for who he is but she has secrets. As all great femme fatale do.
The catalyst for the story is her disappearance which forces Leo to interact with a technological world that he does not understand in order to try and discover her whereabouts and reason for her absence. His inability to interact with technology hampers his search and unable to simply "turn it off and on again", he must resort to blunt (and brutal) force to get answers the old fashioned way.
This ultimately sets him on a collision course with two mysterious characters called Cactus Bill and Duck (played by Paul Rudd and Justin Theroux), a couple of Americans working in the city as doctors and surgeons for the criminal underworld; styled after "Hawkeye" and "Trapper John" in M*A*S*H.
At first, it seems that they are two very different cases. Leo is searching for a girl. Cactus Bill for a couple of permits so he can return to the US with his daughter (just like Viktor and Isla in Casablanca). But as with all great film noirs, the two plot lines eventually converge into a shocking final act.
Mute is like a blend of two Harrison Ford films as Witness meets Blade Runner.
Blade Runner was the film that coined the term Tech Noir, a futuristic blend of the new and old technologies and styles. While it is admirable that Jones has given his character the technological adverseness of an Amish upbringing, to provide more obstacles for our hero there is not enough made of this in the first act to justify his reluctance later on down the line.
In the opening prologue, he has the opportunity to have surgery to fix his vocal cords by this is refused by his Amish parents. Skip forward twenty years and he is living alone in Berlin, surrounded by technology but still remains strict Amish. Why did he move to the city and away from his family but keep his beliefs?
This leads to a situation where the more interesting characters are Cactus Bill & Duck and anytime they are not on screen, you find yourself wanting to go back to them.
One wonders that with a couple of tweaks, the film could have featured Bill as the lead character trying to find a way home for himself and his daughter only to find his plans upended by a vengeful mute bartender.
It could have worked as the prickly customer Cactus Bill is a tour-de-force performance from Paul Rudd, showcasing a side to him that has never been on screen before... along with some epic moustache work.
Rudd has great chemistry with his partner-in-crime Theroux and they spark off each other brilliantly, calling each other "babe" which leaves it open to the audience as to whether they are just two friends and comrades who have served together in war, or if it does hint at something more beneath the surface.
Both actors cope admirably as some startling facts about their pasts are revealed, shocking each other and the audience in equal measure, proving these are not mere carbon copy noir stereotypes.
Speaking of carbon copies, Mute does deliver on Duncan Jones's promise that it would provide some answers to the resolution of Sam Bell's character in Moon. In this Berlin, Lunar Industries is still a major corporation in the world, providing energy, fuel and food products for society. It also seems, if the brief TV news footage is to be believed, is that is tied up in court proceedings as multiple Sam Bells fight for their freedom and rights. There are also "Free the 158" posters dotted around the city adding to the wonderful production design of the film that manages to subtly blend the old and new together with some nice touches such as the Flymeal system that uses drones to deliver takeaway meals to your phone's location.
Unlike a Flymeal that would be delivered in 15-30 minutes, the wait for Mute for both director and audience has been much longer and therefore expectations were incredibly high.
Jones himself has said prior to release that this would be his Marmite film, producing a number of "love it" or "hate it" reactions.
This has certainly been the case since it's debut on Netflix on Friday. Critics reviews have been so savage, this reviewer can't remember this many people lining up to tear something down since the fall of the Berlin wall!
Surely a film that inspires extreme reactions, be that intense acclaim or loathing, is better for cinema than a mediocre film that barely produces a "meh" response.
Mute is far from perfect but Jones wears his heart and references on his sleeve (including an inspired appearance of Chesney Hawkes's The One And Only).
While it doesn't completely work, there is still a lot to admire including a Rudd-y marvellous performance, Clint Mansell's score and some gorgeous production design.

Unlike Leo, one can shout about the positives and as for the negatives, as Ronan Keating would put it "you say it best, when you say nothing at all".