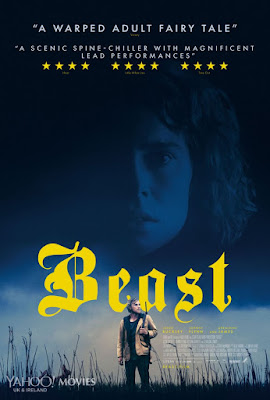 Beast is an unusual, well, beast. The story of woman who becomes increasingly suspicious that the man she is involved with is responsible for a series of murders on the island of Jersey could be the plot of a regional crime drama like Midsomer Murders. Yet here, writer-director Michael Pearce presents it here as a dark adult fairy tale, like a modern take on the Brothers Grimm.
Jessie Buckley (Taboo) is Moll, a young woman who is forced to stay at home to look after her ailing father by her wicked, domineering mother (Geraldine James).
After escaping her birthday party, she meets the mysterious woodsman Pascale (Johnny Flynn) and begins a torrid love affair that will have serious repurcussions for the both of them.
For there is a killer on the remote island, stalking young women. Is Pascale Moll's prince/knight in shining armour or is he the big, bad wolf?
Pearce tells the whole story from Moll's point of view, keeping the audience with her as she is faced with a choice whether or not to trust the man she loves. But is she trustworthy herself? For Moll may have her own secrets buried deep.
Buckley is superb as a woman who was kept under the thumb of a controlling woman, finally breaking free and embracing womanhood and her burgeoning sexuality (as all good fairy tales are about).
Johnny Flynn is perfectly ambiguous as the stranger Pascale. Walking that tightrope between charming and dangerous with effortless ease.
The film is shot with a ethereal beauty, particularly the nighttime scenes which turn a seemingly tranquil, safe island into a world filled with mystery, intrigue and horror.
It takes some dramatic leaps in the third act that may be too out of left field for some audiences but this is a film that from the outset never guarantees this will be a case of "happily ever after".
This is one Beast burdened with glorious purpose.

4 stars
Want to know more about this Fantastic Beast and Where To Find It? Then click here - https://www.rottentomatoes.com/showtimes/?movies=%5B771484193%5D
Posted by Dallas King at 00:23