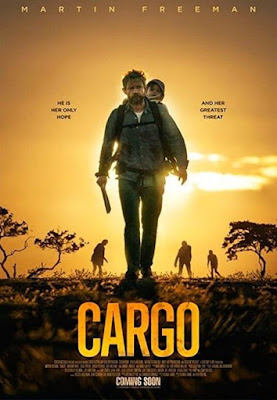 Shuffling onto Netflix without a huge amount of fanfare this week was Cargo, a zombie film starring Martin Freeman.
Freeman plays Andy, husband and father to Kay and Rosie, who are travelling on a houseboat in an attempt to survive a pandemic outbreak that turns infected people into zombies after 48 hours.
The film puts a new spin on the genre by having Andy infected quite early on in the film and faces a race against time to find a safe home for daughter before he succumbs to the infection and turns into one of the walking dead.
Written and directed by Yolanda Ramke and Ben Howling, this is not your traditional zombie horror in the style of Night Of The Living Dead or even the remake of Dawn Of The Dead.
Just like the Australian outback where it is set, it is very sparse in terms of action or gore.
Instead it is more of a character study of a man faced with impossible choices to make to try and protect his family. It just so happens that this takes place within a zombie pandemic.
Cargo plays its cards close to its chest in terms of the reasons behind the outbreak and doesn't get bogged down in exposition as to when, where and why it happened because that it ultimately not important to Andy's story.
One can speculate from the odd visual clue that the disease was potentially spread from fracking the earth and has destroyed the urban areas on the coast, resulting in people moving inland to escape the epidemic.
Indeed, technology is all but redundant out here. The only technology that works are the FitBit-style wrist bands that count down the hours until the virus takes over.
The only people who seem to have a handle on the situation are the Aboriginals who spend their nights cleansing the land of these lost souls. This is clearly part of the filmmakers' ultimate message of the story where we must protect and cherish our land and heritage or risk losing our way of life.
Along his journey, Andy meets several different people who could potentially offer salvation but often end up showcasing the dark heart of humanity.
These encounters cause him to lose hope and contemplate taking not only his life but Rosie's as well for fear of leaving her behind to an even worse fate.
Freeman anchors the film with a strong, heartfelt performance where you can truly feel his pain, anger, frustration at the situation but also his love for his daughter that keeps him going to the very end.
The film's tagline is "He is her only hope. And her greatest threat". Not only does this describe the relationship between Andy and Rosie in the film but also the relationship between Netflix and these low budget, independent films that they have taken into their care.
Netflix does offer an avenue for filmmakers to get there films out there to an international audience but it all depends on Netflix's algorithms and marketing to ensure that they find that audience because there is a chance they could end up lost and forgotten like a zombie with its head buried in the sand.
Rare gems like this need championed and one hopes that, like Andy's wish for Rosie, it finds the perfect home because this is precious Cargo.