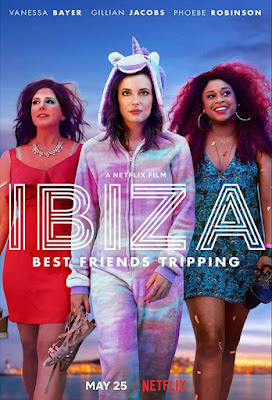 One has to wonder if the Netflix office were tripping when they greenlit and funded this horrendous excuse for a film.
The signs are not good when the most detailed description of the plot on IMDB is "A young American woman and her two best friends seek out a hot DJ in Spain".
As evidenced by the above poster, the film is clearly aimed at trying to cash into the market that enjoyed Girls Trip, Rough Night, Bridesmaids and Sex And The City.
However Ibiza makes Sex And The City 2 look like Lawrence of Arabia.
Gillian Jacobs stars as Harper, a "young American woman" who works at a PR firm and is sent to Barcelona by her boss to close a deal because she is attractive and the clients will want to sleep with her. Her "two best friends" convince her to swap her business class ticket for three economy tickets (because you can just do that apparently) and join her in Spain. Cue hilarity!
These three friends seem to live in a giant open plan apartment in Manhattan even though one works in PR, one is a dental assistant and the other is freelance.
I would go into more detail about their characters but the opening scene where they discuss taking time off work is as deep as it gets.
Harper's defining characteristic is that she hasn't had sex in a long time. Leah (Phoebe Robinson) has "drug friends" who are into drugs and Nikki (Vanessa Bayer) is the ditzy & wacky as evidenced by the scene where she gets sunburnt.
They arrive in Barcelona and spend 5 minutes setting up a hotel room/blacklight/jizz gag that you can see coming a mile away (pun, intended).
The film then follows the two friends to the beach rather than following main character Harper to her business meeting so we can see if she is any good at her job or not. Up to this point we have only seen her getting hung up on by clients.
To cut a long story short (too late), the girls go out clubbing where Harper meets DJ Leo West (and yes I am having to refer back to IMdb for every single name because they are that unmemorable or hardly even mentioned in the film in the first place). Their meet-cute takes place because he notices that she has a dick drawn on her face. Yes, really.
Leo is played by Game of Thrones Richard Madden and he is using his own Scottish accent which makes it feel like he is playing a Calvin Harris-type superstar DJ (here we go) but if you were to close your eyes when watching (and you really should at times), you would believe that James McAvoy was starring in this stinker.
I know, I know, but if they are in Barcelona, "why is the film called Ibiza?" I hear you all cry out in horror.
Well, the film's second act takes place in Ibiza when Harper's awful friends convince her to fly to the party island to see Leo again at his next gig, thus jeopardising her final pitch meeting with the client which takes place the next day. The meeting is meant to take place in the evening so plenty time to catch an early morning flight back but anyone who has ever seen a movie will see where this is going to go.
I struggle to remember if this film with a majority of female lead characters even passes the Bechdel test because all they seem to talk about is having sex with men and how they seem to prioritise this over their careers.
Anyway they arrive in Ibiza... actually make that Croatia apparently because they did not actually film in Ibiza. This is possibly down to the fact that no one in the film can actually pronounce it correctly. Instead calling it "I-bee-za" the entire time.
Watching the film, one thinks that this could be the nadir of the entire production until you become that drunk crying in the bathroom when you realise that someone has managed to license David Bowie's Life On Mars to appear on the soundtrack.
Immediately following this, the girls ask a taxi driver to take them to the sunset which turns out to be on the opposite side of the island from the club and cue awkward journey back with crazy, stereotypical locals, drinking, drugs, sex, rock 'n' roll, etc.
Well, you can probably guess where the third act goes. She gets the man, has sex, misses her meeting but sends her friend, gets fired but somehow manages to score the client which leads her to setting up her own PR firm just like that. Who knew it was so easy?
So DJ Calvin Harris mark 2 phones and asks her to fly to Tokyo to see him but she declines saying she needs to focus on herself and her work. She can't be chasing around the world after him... only for her to change her mind and decide to go. Go female empowerment!
So what did we learn? What great journey did the characters go on? Did they learn that there is more to define them and their happiness than a man? Apparently not.
Ibiza is one bad trip and rather than going clubbing, this should be clubbed to death.