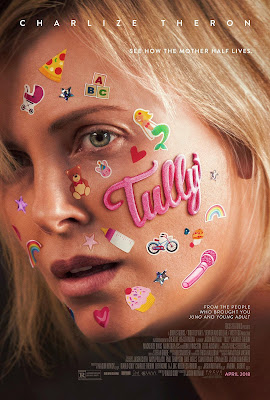 Tully is the final part of Diablo Cody and Jason Reitman's Womanhood trilogy. They began with Juno, about a young woman facing an unexpected pregnancy. Young Adult saw a woman unable to accept growing up and Tully sees a grown woman overwhelmed by the pressures of being a mother.
Charlize Theron, who was dynamite in the trio's previous collaboration Young Adult, is Marlo, a woman nearing the end of her rope. She is a mother of three, including a newborn and a young son with behavioural problems and possibly on the spectrum. She is barely keeping her head afloat yet alone treading water.
Jason Reitman helps to establish this with a wonderful jump cut montage that brings to mind the work of his directorial doppelganger Edgar Wright.
Her faithful but distant husband is too busy working to help so her rich brother hires her a night nanny to help ease her heavy load. Despite her initial misgivings that is. She even says what the audience is thinking, "That's like a Lifetime movie where the nanny tries to kill the family and the mom survives and she has to walk with a cane at the end".
Yes, you think that the movie has potential to go down the Hand That Rocks The Cradle route or the tired "nanny becoming involved with the husband" routine but this is not that film.
This is a warts-and-all, honest, raw portrayal of motherhood featuring an astounding central performance from Theron who will have every single mother in the world nodding along in agreement at the film. This is a woman, like George Bailey in It's A Wonderful Life, in need of saving and her angel is just around the corner.
When the eponymous Tully makes her entrance, she seems to good to be true. Similar to another infamous nanny, she is practically perfect in every way. Young, attractive, full of life yet full of wisdom and instantly connects with newborn Mia and Marlo.
Mackenzie Davis (Black Mirror, Blade Runner 2049) pitches it perfectly, cleverly avoiding becoming a pixie girl stereotype and instead embodying everything that Marlo misses about herself and wishes she could be.
Her appearance gives Marlo a second lease at life. Allowing her to connect with her children and husband again but also making time for herself. This leads to a hilarious road trip for a spontaneous night out in "the city" where they head to Brooklyn listening Cyndi Lauper's Girls Just Wanna Have Fun but goes through the entire album before they reach their destination.
But Tully's being there was only meant to be a temporary fix. A balm. A band aid that Marlo will eventually have to rip off and get back to normality and the third acts developments have proved divisive for some but for this reviewer they worked perfectly given the set up and are executed beautifully.