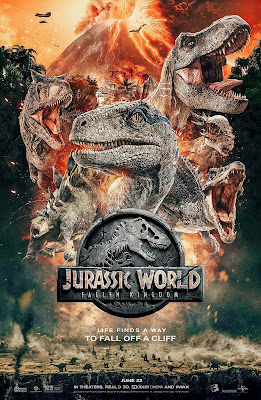 Jurassic World breathed new life into an all-but-extinct franchise back in 2015, to the tune of over $1 billion dollars, prompting the "ooohs" and "aaahs".
Now Fallen Kingdom could cause the running and screaming from the franchise as it splits audiences like a T-Rex tearing through a lawyer on Isla Nublar.
While Jurassic World was a success, there were some that felt it was just rehashing the original story for a new audience. Similar to what Star Wars did with the Force Awakens.
Well if World is Force Awakens, then Fallen Kingdom is definitely The Last Jedi because it will divide the fans by destroying what has gone before (metaphorically and literally by blowing up the original island) and forging its own path, albeit for better or worse.
At first glance, this did not appear to be the case as the first trailer and the first hour of the film play out like a beat-for-beat retread of The Lost World.
Character with previous bad experiences in the park is summoned to an old man's mansion and asked to return to help save the dinosaurs. In this case it is Bryce Dallas Howard's Claire, who is re-introduced via a shot of her much maligned high heels, before pointedly switching to boots upon the island. There, like Malcolm did in the original, they team up with an ex and a couple of thinly sketched supporting characters to save the day but are hindered in their efforts by a bald hunter in khakis who may or may not have a hidden agenda.
In fact, Ted Levine's character seems to be dressed as the lead truck Nazi from Raiders of the Lost Ark and the whole first act has a Indy trying to recover the Ark from the Nazis-vibe with the team hiding on board a boat and dressing like the villains. Even Giachianno's score has a familiar theme to that other Spielberg classic.
Once they are off the island, following one of the most emotionally moving shots in the saga and indeed of the last few years of cinemagoing, J.A. Bayona is finally able to take the franchise in a new direction. Like a geneticist, creating a new hybrid of dinosaur perhaps.
Having made his name with The Orphanage, Bayona goes back to the well by setting the remainder of the film within a creepy mansion. This one also features a dark secret in the basement but unfortunately this is a surprise that was spoiled by the final trailer for the film.
To be honest, if you have seen that trailer, you have seen Fallen Kingdom as there are no real surprises left to be had.
At one point, Claire asks Owen (Chris Pratt), "Do you remember the first time you saw a dinosaur?"
For many of us, our idea of what a dinosaur is and looks like was from Jurassic Park and the incredible animatronics.
Sadly, the majority of the dinosaurs in this film are now CGI and they do lose some of that sense of wonder knowing they were created in a computer rather than a lab. Which is a huge shame given how well the effects from the original film still hold up.
The over-reliance on CGI dinosaurs and the 12A rating mean that Bayona's attempts to create a stalk n slash style horror mood in the third act lose some of their power and the end result is as toothless and neutered as a hand-reared velociraptor. 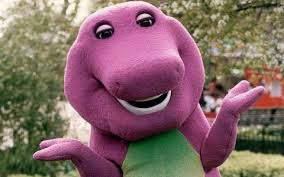 Please can we call time on the T-Rex suddenly appearing in shot to eat something/someone? Yes it is a shock for the audience but are we really expected to still believe that the dinosaur or character does not see or hear it coming?!

End of spoilers. Here is a happy dinosaur! 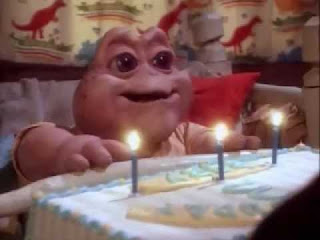 Anyway, the kid at the beginning of the first Jurassic Park said it best, "that's not scary, looks more like a six foot turkey". That's what Jurassic World Fallen Kingdom is, a giant turkey that is about to go extinct.

2 stars (would have been 1 star but for the Brachiosaurus shot)
Posted by Dallas King at 05:28