The Secret Of Marrowbone - EIFF review 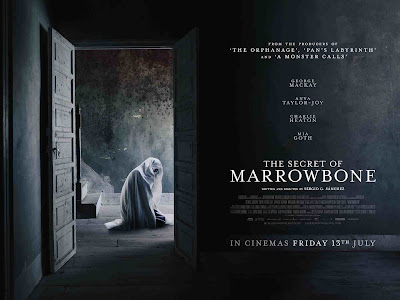 Sergio G. Sanchez effortlessly makes the transition from J.A. Bayona's screenwriter to his own directorial debut The Secret of Marrowbone.
And it is clear that Sanchez has learned a few things from his friend because the film effectively combines the emotional family drama and struggle at the heart of The Impossible with the mystery and chills of The Orphanage.
Scottish actor George McKay stars as Jack, the oldest of the Fairburn siblings who arrive with their mother's at her old family home called Marrowbone in upstate New York, having escaped from their abusive father back in England.
They slowly adapt to their new life, befriending a young woman called Allie (Anya Taylor-Joy) who lives on a nearby farm but their idyllic existence threatens to be shattered when their mother succumbs to illness. Jack promises to do whatever he must to keep them all together. Whatever the cost.
The appearance of a young, upstart lawyer dealing with the deeds to the house will force the family to confront the ghosts of the past and face up to a few skeletons in the closet.
Why are all the mirrors covered? Is there really a ghost in the house?
Sanchez wisely takes his time in drawing out the mystery of the true nature of the eponymous secret of Marrowbone, keeping the audience in the dark until the horrifying truth is finally revealed.
The house itself becomes another character in the film thanks to incredible set design and effective use of sound mixing to draw every creeping ounce of dread out of a creaking floorboard here or piece of splintering glass there.
McKay excels as a young man whose responsibilities to his family weigh heavy on his shoulders and at odds with his desire for a relationship with Taylor-Joy's character who offers a ray of light, hope and possible redemption.
With recent horrors such as The Babadook and Hereditary leading the way in balancing heartfelt family drama with chill-inducing scares, Marrowbone is one secret that will hopefully not remain a secret to audiences.

The Secret of Marrowbone is on general release in the UK from Friday 13th July.

Listen to an interview with director Sergio G. Sanchez on the Filibuster podcast on The Nerd Party here.