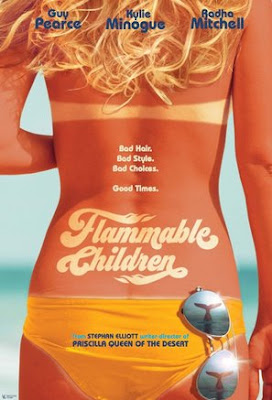 If there was one word that would perfectly encapsulate Flammable Children (Swinging Safari), it would be "romp".
(Partly) based on Priscilla Queen Of The Desert writer-director Stephen Elliot's childhood growing up in Australia in the Seventies, the film feels like Richard Linklater directing a nostalgic, X-Rated version of Neighbours.
It is easy to draw those comparisons when the film takes place over the course of a summer focusing on three families that live on the same street, including a married couple played by Guy Pearce and Kylie Minogue.
The film is narrated by the adult version of Jeff Marsh, looking back at his fourteen year old self during the famous summer that his small town became famous when a giant blue whale beached itself in the middle of their popular tourist town.
Jeff spends his days obsessively making home movies on his Super 8 featuring his group of friends doing outrageous stunts. However he develops more than movies that year as the sparks of romance flicker with neighbour Minnie.
It isn't just the children coming-of-age as the summer of love has an affect on the adults as well, leading to a "Swinging Safari" night that will have lasting repercussions for the neighbourhood that devolves into a hilarious game of petty name-calling and practical jokes.
The top notch cast gamely commit to the material and all look ridiculous in their fake tan and outrageous outfits. Their over-the-top characteristics in keeping with how the children's perspective and how they would have viewed their parents at the time.
The period detail is spot on and enhanced by an eclectic range of super sounds of the Seventies (complete with obligatory Kylie Minogue cover on the end credits).
While the film has a sweetness and melancholic wistfulness for a time-gone-by, it is the humour that will stay with audiences.
Easily the funniest film to play the Festival, this has more laugh-out-loud moments than shrimps on a barbie! Plus some of the most non-PC laughs this side of a Ricky Gervais stand up e.g. a girl reading a magazine article about Karen Carpenter's brand new diet!
Just like the eponymous Flammable Children of the title, this is a red hot Summer hit that you must go and see. If not you're a flaming galah!