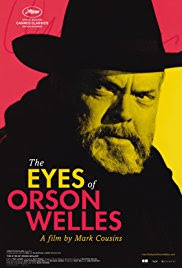 Synopsis:
The art, sketches, set designs and storyboards Orson Welles produced throughout his career act as an entry point for director Mark Cousins to delve into the life and career of one of cinema’s most talented filmmakers. Welles trained as an artist before becoming an actor and director, and Cousins has been allowed unprecedented access to a treasure trove of images that provide a fascinating glimpse into Welles’ visual thinking. This film is a journey through his life punctuated by delightful insight.

Review:
Mark Cousins' admiration for Orson Welles shines through in this intimate portrait of a man whose public persona was larger than life. Cousins uses access to Welles' personal works of art to paint a picture of the private man behind the image and how his artistic style on the page and canvas influenced his work on the big screen.
Cousins' uses his trademark and distinctive narration to converse directly to Orson via a series of "letters" looking at different stages of his life, career and personality.
Like the original cut of The Magnificent Ambersons, the documentary goes on slightly too long but provides a new perspective to Welles and new insights into his work. Even if, unlike Citizen Kane, he ultimately cannot be defined by any one particular piece of art.