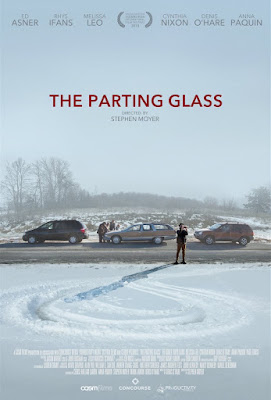 Synopsis:
A family dealing with their sister’s death travel across country to collect her belongings and piece together their memories of the woman they lost.


Review:
Coming from a screenplay from Denis O’Hare, an actor equally at ease on the stage and screen, The Parting Glass feels theatrical in its origins. It is essentially a film with scene after scene of people talking in cars, motel rooms and diners.
However there is a point during the film that you start to feel that something this raw and powerful must have come from a real place and is inspired by true events.
O’Hare has assembled a group of friends (who also happen to be incredible actors) like Ed Asner, Melissa Leo, Cynthia Nixon and Rhys Ifans to become his family to help work through this traumatic event.
The group are completely convincing as a family and from the first couple of interactions, you feel as if these people have known each other all their lives. There is a familiarity and openness between that is almost impossible to fake.
Actor turned director Stephen Moyer makes an assured debut. Knowing when to let the actors take over and let a scene play out. Witness for example the scene towards the end where they get drunk in a motel room and share their memories of their late sister, wife and daughter.
Although only glimpsed briefly in flashbacks and memories, Anna Paquin makes a lasting impression as the woman who has brought this family back together. It is a demanding performance because it is essentially five different performances as she is remembered differently by each person she knew.
Similar to Pixar’s Coco, it understand the importance of memory in keeping someone alive and also how everyone’ individual ones will be unique to them. Whether that be in their thoughts or physically through photographs or video.
The Parting Glass certainly won’t be a parting film for Moyer or O’Hare as they have created a tender, moving film that celebrates the fact that True Blood is thicker than water.