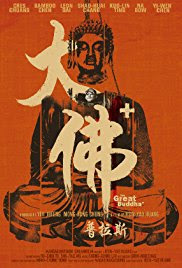 Synopsis:
Pickle is a night security guard at a bronze statue factory. His colleague, Belly Bottom, works as a recycling collector during the day, and Pickle's biggest pleasure in life is flicking through the porn magazines Belly Bottom collects in the small hours in the security room. Having late night snacks and watching television are an integral part of their dull lives. One day when the television is broken, their lives are changed forever. The story involves gods, the middle-aged men's sexual desire and the conversation between ghosts and humans. Maybe the audience will find it preposterous, but isn't life itself a farce?

Review:
Documentary filmmaker Huang Hsin-Yao fingerprints are all over his debut feature, adapted from a short film of the same name.
In fact it starts off documentary style with Hsin-Yao introducing the film; talking about the financiers and how he plans to chip in on the story where he deems it necessary.
Immediately, this not what one is expecting and sets the bar for the rest of the film. It will follow the rules of narrative fiction but will happily break them along the way (along with the fourth wall) but it works. Drawing the audience further in to the story.
It begins as one thing; a sort of mockumentary on the lives of a group of men, working menial jobs and who are so low down on the class scale that they don't even have real names. They are referred to as nicknames like Pickle and Belly Button. Hsing-Yao describes their days, their motivations. Even stopping to mention how he had forgotten to ask one character why he was fascinated by those grabbing machine games. At which point the man stops, turns to the camera and responds to the director and audience.
Pickle works the night shift as a security guard at a workshop that creates giant Grand Buddha statues, hence the title of the film. One night, Belly Button comes over and convinces him to while away the boredom by viewing the dashcam footage of his boss's Benz.
This is where the film evolves into something else entirely as the footage from the car is in colour which provides a shock to the system but also a shock to the characters as they witness an incident that could have dramatic consequences for all involved.
Drawing inspiration from Hitchcock and Rear Window, plus films such as Blow Up and Blow Out, it proposes a mystery about obsession, voyeurism and the dangers of living life through a lens.
The Great Buddha+ is just like the statue that is featured in the film. Something to be admired and marvelled but also can never truly be completely understood or explained.