To Catch A Thief - review 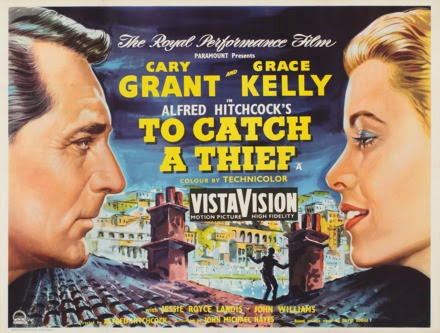 Strange to think that Alfred Hitchcock is one of my all-time favourite directors yet I had never seen To Catch A Thief in all its Vistavision glory before but that glaring omission was rectified thanks to the recent re-release from Park Circus.

Hitchcock's tale of sun, sea, seduction and stolen jewels on the French Riviera is enough to banish every memory of the last time I saw "Grace Kelly" in France in the awful Grace Of Monaco.

Grace Kelly simply shines as the daughter and heiress of a target for the cat burglar that Cary Grant's smooth former thief is trying to catch in order to clear his name.

Hitchcock has always been more recognised for his darker films such as Psycho and Vertigo but they always had a sense of humour (however black) and this is "Hitch" at his most light and playful.

The chemistry between Grant and Kelly is simply delightful and their flirtatious wit and dialogue sparkles more than any diamond "the cat" might steal.