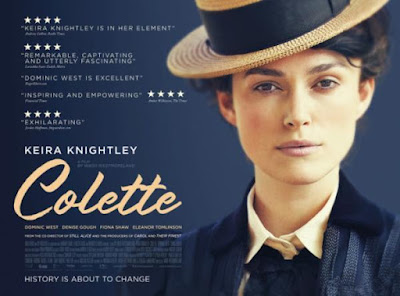 Rather surprisingly, Colette is not based on the fallout of the shocking Oscar snub of Toni Collette for Hereditary but the true story of Colette Willy, the wife of the famed French author and his muse and ghost writer who created and wrote his finest work, the Claudine novels.
Despite the fact that Colette is apparently one of France's biggest selling authors of all-time, this reviewer was shockingly ignorant of her and her story (particularly when a Wikipedia search post film revealed she wrote the novel that was turned into the Oscar winning film Gigi).
Yet that does not matter as the film does an excellent job of taking the audience through Colette's story. From timid, meek ingenue to muse and ghost writer (sometimes to the point of tortured slave labour), through her burgeoning sexual awakening to the point where she truly discovers herself and stands up to her husband demanding full credit for her work.
*Note - these are not spoilers as it is all in the trailer*
Now men taking credit for other people's work is certainly nothing new and what Colette does very well is remind us that sadly not much has really changed in the 119 years since the publication of Claudine a L'Ecole.
Yet Henry Willy, played with relish by Dominic West, is playful, charming, seductive and persuasive in his controlling ways and arguments to keep his name on the books, claiming he is a "brand" and any suggestion that he did not pen the work could be catastrophic and ruin their lifestyle which the books pay for.
He is in many ways the perfect abuser and despite his obvious charms, one hopes that Colette will find a way out from under his grip.
Knightley impresses as Colette, coming into her own just as Colette does when she experiments with her sexuality and gender role. She has always seemed more comfortable and fitting within a period setting and it is no different here, doing a fine job of reminding people of this trendsetter and inspirational role model.
Colette. The best a woman can get. Or should that be the best women can be?