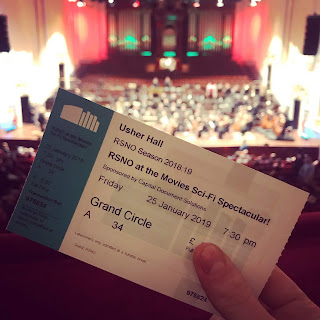 Tonight the Filibuster team from The Nerd Party were invited to the Usher Hall for the Royal Scottish National Orchestra's Sci-Fi Spectacular show celebrating some of the greatest and most iconic music cues from science fiction cinema.
For the last four years, the RSNO have performed at the Edinburgh International Film Festival, providing live scores to cinematic classics such as Back To The Future, E.T. The Extra Terrestrial, Raiders Of The Lost Ark and Jaws.
These events are always hugely popular and the Sci-Fi Spectacular was no different with a packed audience eager to hear the tunes from their favourite films and it always seems like the orchestra are having as much fun playing them as the audience do listening to them.
If you noticed a theme with the film choices for the live score events, it would be no surprise to learn that the first half of the show was dedicated to the music of John Williams and the Star Wars saga (prequels and originals).
From the Opening Titles of A New Hope (including Fox fanfare) through Across The Stars to Princess Leia's theme, Williams's contribution to the success of the saga is undeniable with the images and soundtrack unseparable in the mind.
In fact, based on tonight's concert, you would be forgiven for thinking that Williams soundtracked the entire genre as the second half also included his suites for Close Encounters Of Third Kind and E.T.
Yet other composers did make an appearance, from James Horner's work on Avatar to Michael Giacchino boldly going where one man had gone before with his rousing reinvention of the Star Trek theme to Jerry Goldsmith's work on Alien.
But there was time for the RSNO to take us back to a galaxy far, far away for an encore of the Imperial March.
Now that's value for money. A trip through the galaxy and time and space and you don't even have to leave your theatre seat.

Listeners of The Nerd Party can get a 20% discount on tickets for the show by using the code JEDI20.
Posted by Dallas King at 15:30