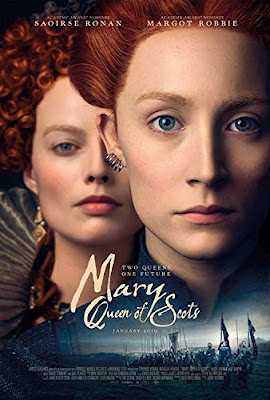 Mary Queen of Scots got her head chopped off. *Spoiler* Only it isn't really. It is historical fact and it's the exact name of a play by Liz Lochhead so the new film by Josie Rourke is spoiling nothing by beginning the film with Mary Stuart's walk down the Green Mile to her death before jumping back in time 25 years to see the events that would lead her cousin Queen Elizabeth I to sign her death warrant.
Let's quickly address the elephant in the room shall we? No, not the fact that the Scot Mary Stuart is played by an Irishwoman and the English Queen is played by an Aussie in the greatest piece of Scottish cultural misappropriation since Highlander had a Frenchman play a Scot and the world's most famous Scot playing a Spanish-Egyptian! We're talking about the fact that despite introductory text saying that Mary moved to France as an infant, she returns to Scotland at the age of 18 with a perfect Scottish accent (well done Saiorse Ronan who puts Christopher Lambert, Mel Gibson and even Chris Pine admirable efforts to shame).
Historical inaccuracies aside, this account of Mary's rise and fall is well handled by Josie Rourke, who until this point is best known for her stage work directing for the National Theatre and the Donmar Warehouse but on this evidence will seamlessly transfer to further outings on the big screen.
In spite of what the trailers may have implied, with shots of Mary upon a noble steed riding with soldiers and talking about how "swords are not just for show", this is certainly no Braveheart or Outlaw King. The battles hear mainly take place within the walls of castles and parliament chambers as the two Queens become pawns and are maneuvered into opposition by the very knights, bishops, etc who they are meant to govern e.g David Tennant's John Knox and Guy Pearce's William Cecil.
Whilst some will claim that films like this seek to widen any discourse between England and Scotland, similar to the re-release of Braveheart just before the Indy Referendum, in fact what this film sadly highlights is the fact that even 450 years on, some men are still very uncomfortable being ruled and governed by a woman!
One need look not further than the scene where Elizabeth tells William Cecil that she has almost become a man whilst ruling as Queen, unwilling to take a husband as she believes all they will do is scheme and plot to usurp her and take her crown. The exact thing that happens to Mary with her husband Henry Darnley (played by louche, debonair swagger by the Scottish star of the moment Jack Lowden) and her court of supposedly loyal subjects.
As one would expect from a theatre director, Rourke really brings out the best from her actors allowing them to drive the drama forward and the cast is uniformly excellent but the male cast are outshone by the central pairing of Robbie and Ronan (which when written like that makes it look like the film is about a secret meeting between members of Take That and Boyzone during the Nineties).
Their (albeit perhaps fictional) face-to-face meeting is a masterclass that proves that the pen is mightier than the sword and a battle of words can make for just as thrilling a contest as an epic battle of swords and shields.
So while Mary Queen of Scots may have had her head chopped off, Mary Queen of Scots proves that Saiorse Ronan and Margot Robbie stand head and shoulders above the rest of the field proving themselves to be two of the finest actresses of their generation.