A Long Way Down - review 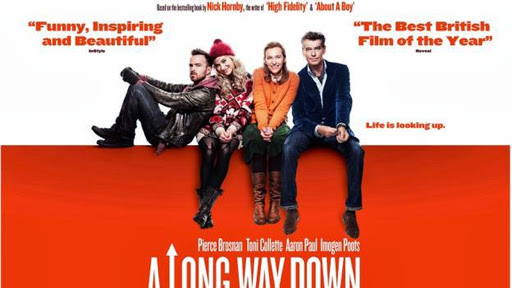 High Fidelity is my all-time favourite book, one of my favourite films and one of the best book-to-film adaptations of all-time.

A Long Way Down is a very long way down in terms of quality.

The suicidal "Topper House 4" consisting of a disgraced TV presenter (Pierce Brosnan), a single mother struggling to cope looking after her disabled son (Toni Collette), a party girl and politician's daughter (Imogen Poots) and mysterious pizza boy and cancer sufferer JJ (Aaron Paul) meet on New Year's Eve at the top of a tall building and agree not to commit suicide until Valentine's Day.

The film looks at the bond that grows between them when their story hits the tabloid headlines and whether or not this new found friendship will prove enough to change their outlook on life (and possible death).

All of the characters have problems but it is the film which has the biggest problems.

The tone of the film is horribly misjudged as it bounces around from light-hearted comedy to social drama to emotional melodrama to Brits abroad lark and never settles on one making it difficult for the audience to affectively relate and emote.

Plus despite each character getting to narrate a different part of the story and explaining their reasons, they never really show us the inner turmoil and struggle that has led them to the point where ending it all is the only solution for them.

Imogen Poots is the film's saving grace and the only one who manages to strike the right balance between comedy and tragedy, helped by the fact her character has mental health issues potentially brought on by a family tragedy and/or pills.

A "comedy" about suicide that tackles the subject matter with kid gloves? Unlike its protagonists, the film falls flat on its face.