Under The Skin - review 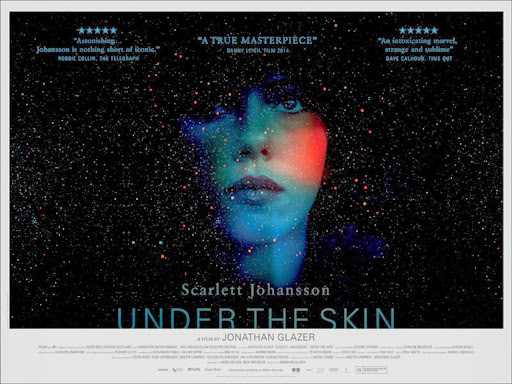 Warning, this review discusses some scenes that contain minor spoilers so it is best read with prior knowledge of the film.

The Urban Dictionary definitions for the phrase "under the skin" are as follows:

1. when you meet someone and you're drawn to them. you can't stop thinking about them even when you don't know them. something about them just sparks something down deep. your imagination starts to run wild and you're physically and emotionally altered. they fascinate you

2. someone really pisses you off. they said something and you can't ignore it so you have to say something to defend yourself and your feelings. it makes you mad and almost at a loss for words. some rubs you the wrong way

Both of definitions will be equally applicable to Jonathan Glazer's new film Under The Skin.

There are some who will declare it a masterpiece while others will say it is the worst thing they have ever seen. It will become 2014's Only God Forgives in terms of splitting audience opinion.

My first reaction to the same as the one I had for Only God Forgives which was I wasn't exactly sure what I had just seen but I knew I had to see it again.

So that's exactly what I did.

Initially Under The Skin is a rather undefinable viewing experience.

The film begins with 2001-esque visuals before following Scarlett Johansson driving round Glasgow with hidden cameras as she hunts for young, single men to lure back to her place where Mica Levi's haunting score and siren's call leads them to their demise in a nightmarish sequence.

Sure people use names like Kubrick, Roeg, Lynch to try and explain the use of visuals and surrealism but Glazer has crafted a completely unique piece of filmmaking that turns the ambiguity factor all the way up to 11 and allows for endless theorising about the plot, motives and true nature of Scarlett Johannson's character.

It's upon the second viewing that, ironically, you start to get under the skin of the film.

Is the woman the biker picks up at the beginning of the film Scarlett Johansson's predecessor? Who is the biker? Is he the bodyguard of the female siren? Are they prone to curiosity and empathy?

When the film changes course and the alien goes on a voyage of self-discovery, it was slightly jarring first time round but feels completely natural on repeat viewing.

Where initially all she sees are targets and victims, the longer she carries out her task the more she begins to see life.

There are two montages of people wandering round the city. The first is shot in a cold, harsh manner but the second time round the people slowly give way to a gold shimmering light and from the ugliness of life comes beauty.

They say the eyes are the window to the soul and the eyes play an important role in the film.

Her eyes are initially cold and blank, the "uncanny valley effect" so to speak where CGI is unable to recreate the sparkle and life inside the eye. The biker checks her over at one point and pays close attention to her eyes, perhaps checking for any glimmer of "life", and following her encounter with the man suffering from neurofibromatosis sees something different and new in her eye that sparks the natural evolution of her character and the movie into something completely alien... to her at least.

And this evolution is perfectly realised by Scarlett Johansson in her finest performance to date.

Later she has a childlike innocence and curiosity as she tries to experience human life which include wonderful moments as tension builds over a mouthful of Black Forest gateau or her utter bemusement at watching Tommy Cooper on TV.

Ultimately Under The Skin is undefinable, utterly unique (unless Captain America The Winter Soldier features a scene where Black Widow and Cap discuss the locations of Asda and Tesco) and completely unforgettable.

Like the title says, this film will get under the skin and stay with you forever.