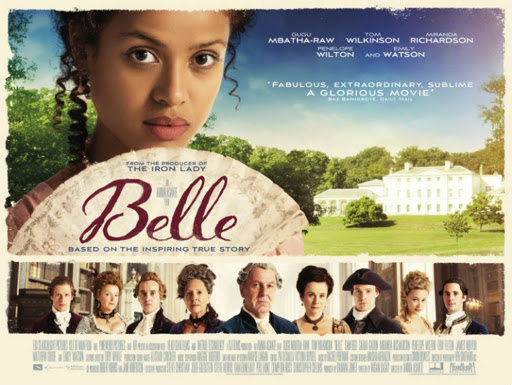 Belle, for me, is the epitome of a 3 star film.

It looks good, interesting story, well acted, etc. Does nothing that would provoke deep criticism beyond the third act being overscored to within an inch of its life constantly telling you exactly what you are supposed to be feeling yet ultimately it is nothing more than "a good film".

It delivers exactly what one would expect from a period drama, and I'm not talking about the Pride And Prejudice sequel where Elizabeth discovers she is late.

There is sumptuous costume design with an abundance of bodices and bosoms on display. Beautiful scenery and locations. Good performances from people who can do this sort of thing in their sleep (Tom Wilkinson, Emily Watson, etc). People talking about love, wealth and status in clipped posh English tones through stiff upper lips.

And that is where the problem might lie. The film never breaks free from the shackles of its origins to really get into the dark heart of the story.

The trailers present it as a Jane Austen-esque piece yet there is a much more interesting story underneath Dido's quest for love and acceptance and that is an Amistad-style court case ruled over by her uncle and guardian.

There was potentially a much more interesting film here if it focused on their relationship and how much she influenced him in his decision rather than the love affair between her and a young wannabe lawyer and activist although Gugu Mbatha-Raw has great chemistry with both in a potential star-making turn.

A different take on the story could have seen Belle end up a great film rather than just a good one.