How To Train Your Dragon 2 - review 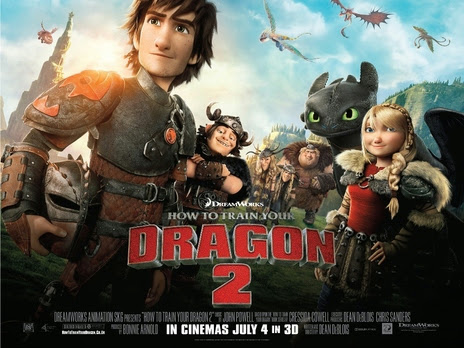 Director Dean DeBlois certainly has his animators well trained now because in terms of spectacle, HTTYD2 is second to none in terms of animated movies with thrilling flying and battle sequences including one shot (glimpsed in the trailer) where a dragon flies over a cliff and soars over the battlefield and rivals anything seen in the Lord Of The Rings.

Described as "The Empire Strikes Back" of the franchise, there is no shortage of spectacle and heart in this story as it widens the landscape of the universe beyond Berk, introducing new characters and threats and with this comes the usually "darker" tone with an evil force threatening the alliance between dragons and humans.

The accent issues continue to be unexplained with the young (presumably) Scandinavian Vikings having American accents and the older guard being Scottish.

Newcomer to the franchise Cate Blanchett continues the 2014 trend for dodgy Scots accents on film (see Sharlto Copley in Maleficent) as it flits between Scottish and Irish.

I'm not a cat person or a dog person and probably not even a dragon person as I didn't have the same kind of love and attachment to the franchise that some other do or Hiccup and Toothless have.

Many will have a roaring old time but whilst it is enjoyable it did dragon a bit in the middle act.

Email ThisBlogThis!Share to TwitterShare to FacebookShare to Pinterest
Labels: How To Train Your Dragon