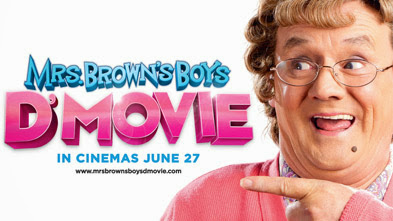 Having never seen an episode of the TV series Mrs Brown's Boys, I was never going to be the target audience for the big screen debut.

However I must hold my hands up and admit that I was rather surprised by the end result.

Yes, it was even worse than I could have possibly imagined!

Following the year's most halfhearted musical number (and I should know as I have watched Walking On Sunshine), the plot is quickly established where Mrs Brown's market stall and livelihood is threatened by local politicians, Russian mobsters and a evil company looking to build a shopping centre on the site.

The film revolves solely around Mrs Brown so her aforementioned "boys" barely get so much as a look in. I honestly can't even tell you any of their names as there was no real introduction or characterisation within the film.

The most developed relationship with one of her children turns out to be with her daughter... So it begs the question "why is it not called Mrs Brown's Girl?".

The lack of clarity over characters to the uninitiated is the least of the movie's problems as it is one of the most poorly produced pictures I've ever seen.

The production is so bad that it features "intakes". Comedies often feature outtakes over the end credits where you see the cast fluffing lines, corpsing, etc but Mrs Brown's Boys actually keeps several of these moments in the finished film!.

I would find this shocking but it is in a film which on one hand features an impassioned speech about how racially diverse immigrants have benefitted the city of Dublin yet also features the single-handedly most racist "yellow-face" portrayal of an Asian character since Mickey Rooney in Breakfast At Tiffany's as Brendan O'Carroll does a Mike Myers and doubles up on characters as a Ninja Instructor.

This film stunk up the cinema so bad that if it was a fragrance it would be Eau D'Humanity!