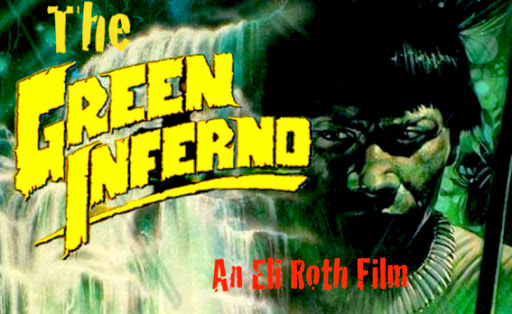 It's a good thing that I had an early morning Aberdeen to Edinburgh Megabus to digest my breakfast before the early morning press screening of The Green Inferno because there was a chance that my sausage and egg mcmuffin could have made an reappearance halfway through when the Inferno really ignites.

This film is Eli Roth's love letter to the cannibal horror films of the Eighties, particularly the infamous Cannibal Holocaust.

This movie has a similar plot which involves a group of American student activists attempting to safeguard an area of the Amazon jungle only to be eaten by the very people they are trying to protect. THAT Alanis Morrisette is the true meaning of irony!

The first half of the film which follows the activists in visiting Peru and staging their protest feels like it goes on forever and the slow burn approach was not that effective. I know that it is designed to help develop the characters but given the nature of this film, we all know what they are here for and I for one would rather have just skipped the appetisers and moved straight to the main course. After all, do you spend this much time getting to know the turkey you are having for Christmas dinner?

Beyond Lorenza Izzo's Lead character Justine, the rest of the crew are the kind of whiny, self-serving tree huggers you would gladly see served up in a running all-you-can-eat buffet.

When dinner is finally served, this is where the film comes alive (ironically).

Roth's cinematographer Antonio Quercia captures a range of greens, yellows and reds so bold and vivid that it gives the film a unique colour palette which only serves to increase the intensity of the images when the group reach the cannibalistic tribe's camp.

The first human sacrifice is genuinely one of the most horrific things I have seen on a cinema screen in years. I consider myself a big horror fan these days but even I had to turn away at a couple of moments.

Kudos for that must go to the sterling work of horror makeup and effects gurus Greg Nicotero and Howard Berger.

The shocks continue to be served as rapidly as a nine course tasting menu of depravity with a side order of humour as dark as peruvian cocoa powder as the group slowly reduces in number before the inevitable escape plan is formulated.

Whether or not anyone escapes being dessert is not for me to reveal here but I can guarantee that you will need a strong stomach in order to find out.

If Roth had trimmed the fat from the opening act, this might have been worth going back for seconds over but it is nice to see someone whip up an 18 rated horror delight rather than the tame 12A and 15 certificated dishes so often cooked up by Hollywood.