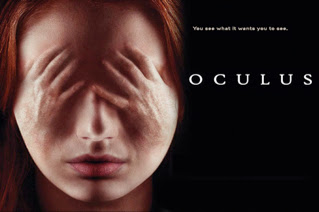 The idea of a mirror being a possible conduit for evil is nothing new. How many of us have looked into a mirror first thing in the morning and seen something horrific staring back at them?

Oculus not only offers a refreshingly clear and new look at the old horror plot line of someone returning home to face a past trauma but becomes the first film in the history of the genre to not resort to the old "no one in the mirror, look away, look back, jump!" cliche.

All the more impressive given that the mirror plays such a central role in the tragic events that saw Kaylie and Tim Russell lose their parents.

10 years later, Kaylie and Tim return to their family home in order to put the past to rest.

However there is an interesting dynamic at play in that the adult Kaylie (Karen Gillan) is using cameras and sensors to document and prove that the mirror contains a supernatural spirit while Tim has undergone years of psychotherapy and is convinced that they created this story as a way of explaining and coping with their parent's psychotic breakdown.

The opening prologue only hints at what exactly happened and as the siblings attempt to discover the truth behind the mirror, they are forced to reflect on the past.

It cleverly switches between the past and present timelines but can they (and the audience) believe everything that they see as the two timelines begin to twist and bleed together thanks to the mirror's effects on the inhabitants of the house.

One of the biggest shocks early on is just how good Karen Gillan's American accent is. It is absolutely flawless and it actually took me 10 minutes or so to get used to hearing it. It is as good a switch as Hugh Laurie in House and Andrew Lincoln in Walking Dead and the finest American accent I've ever heard a Scottish actor deliver on screen.

She delivers a feisty determined performance and ably supported by Brenton Thwaites as Tim and the child actors who play their younger counterparts, with strong turns by Rory Cochrane and Katee Sackhoff as their increasingly unstable parents.

The actors sell the premise well under the capable hands of writer-director Mike Flanagan who slowly ramps up the creepiness factor to unsettling levels without ever having to resort to the cheap scares signposted by loud music cues.

Plus there is one genuinely wince-inducing scene that is guaranteed to make people think twice before making an apple part of their five a day.

Mirror Mirror on the wall, is Oculus the fairest horror movie of the year?

So much so that I can't wait for the sequel Oculus 2: Oculus Rift