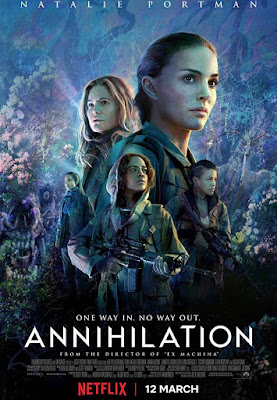 Annihilation is a film about a team of scientists who enter "the Shimmer", an environmental disaster area of unknown origin, unsure if they will emerge from the other side.
Writer-Director Alex Garland must have felt a bit like that during the post-production process, wondering if the finished film would ever see the light of day.
The much publicised studio stories claim executives at Paramount felt the film was "too intellectual" and wanted Garland to make changes.
He refused and this resulted in them giving it a small, short theatrical run in America but giving Netflix the international rights.
Now this once again opens up the argument over the audience benefits of a non-theatrical release.
Some are outraged that they cannot watch it on a cinema screen as the director intended. Others claim that by releasing on the streaming service, more people will watch it there than ever would in a cinematic environment.
Who is right? Well, in this particular case, both are right in some ways.
Following his Oscar-winning Ex_Machina, Garland has moved up in terms of scale from a theatrical three-way chamber piece on what it means to be human, to a much grander (wo)men on a mission story where a group of people (possibly literally) meet their maker.
Natalie Portman plays Lena, a biologist who's soldier husband (Oscar Isaac) has been missing in action for over a year. Consumed by grief, she is all but lost when one day he returns to her dazed and confused. Falling ill he is taking to a military base where she learns he is the only person to have returned from "the Shimmer". Wanting to know what happened to her husband, Lena volunteers to join a team heading in to find the source of the Phenomenon.
Inside the all-female team find plant and animal life that should not exist in nature, along with very real and dangerous threats to their existence, including each other. For the deeper they venture in to the area, the more their connection to reality starts to slip.
Annihilation is a film that was shot to be experienced on the big screen. It has some of the most stunning and visually arresting images you will see all year and some of the impact will understandably be lost if watching it on a laptop or iPhone for example. But its power is in no way diminished and the film's imagery and story will stay with audiences days after watching it.
It is certainly not a film that everyone will appreciate on an initial viewing. The trailer entices audiences in with a brief set up of the story and focuses on certain moments of action and horror but in reality the film has much more in common with films like Arrival and Under The Skin, with a hint of Event Horizon.
That is music to the ears of some film fans to be sure. Arrival and Under The Skin are both five star classics (even if Skin took a few viewings to truly appreciate) and Event Horizon is now a cult classic. However these are not instantly accessible films that found big audiences at the cinema. For Event Horizon in particular, it was the home video market where it truly came alive and that is where Annihilation has the opportunity to grow its potential fanbase.
While there will be some people who just don't get it, there will be some who find it akin to 2001: A Space Odyssey in its themes and messages about humanity. They will spread the word and build up its cult status for years to come. Potentially even organising underground guerilla screenings.
It's legacy on the science fiction genre certainly won't be annihilated. If anything, this is just the beginning!